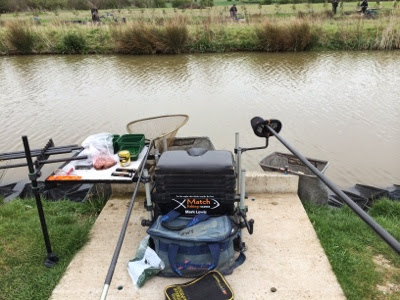 A new venue to explore in Nottinghamshire with the Matchfishing Scene lads, Jansons Fishery

It was a long old drive from London but the weather was improving and we had heard of big bags of carp from Janson's so I was looking forward to the days sport.

Hint to anyone going to Janson's Fishery.  Follow the instructions on there website.  I put the satnav postcode in and ended up down the road in the village of Bingley (I think).  A quick call to Colin and Jads put me on the right road and I was soon at the pub ready for my big breakfast... I certainly needed it!

The usual suspects where present including Mr Dwarf (BNF), No Hope, Sconey, one half of the Merce brothers (Colin), Sconey, Bagger Austin, Stevie 'Coke' B, Pete Bailey and Daddy May to mention a few.

The Draw
Paul (No Hope) was well organised and even after the mandatory mickey taking had us all sorted for the draw.  I pulled out Peg 5 and my neighbours for the the day would be Doddy and MPO.com so at least I would have a laugh, particulary with Sconey next to Mark.

The Set-Up
Pole only as the lake is just over 14 metres wide.  So the lines were set up as follows:

I'd come equipped with blue hydro which in hindsight was probably too light.  White would have been better as the lake only contains carp, although there is rumor that one lonely roach lives in there too.  Bait list was simple, fishery 4mm and micro pellets, dead maggots, corn and worm for a change of hook bait in the margins.

The All-In
The far shelf was the first target and I decided on a cautious approach so kinder potted in some micro's before lowering the rig down.  The wind of course, as usual had increased making the far shelf target a little bit harder than it should be!  Pushing the rig out again after 10 minutes of lifting and dropping the rig, to be fair it felt more like trotting with the wind pushing the float through the swim, I finally hooked a fish!

After some time... well two hours to be exact I had one fish in the net and lost another one... the fishing wasn't as expected but everyone on my section seemed to be struggling.  Sconey had four fish in the first 15 minutes and then nothing else in those 2 hours...

I had primed the 5 metre line which was a lot easier holding the pole in the wind, baiting with three dead red maggots and flicking a few pellets in the fish responded and I was in again.  The bites were taking some time and it was clear that the fish were not on the bottom, so I shallowed the rig which brought quicker bites.  The next fish, disaster, the elastic broke at the dacron connector!  As I was putting a new rig on the line, Mark next door hooks a fish and it was the same one that my rig was attached to... he kindly gave me the float back at the end of the match ;-)

I stayed on the 5 metre line, but kept pinging pellets across as there was plenty of activity.  When the wind dropped I would go over to the far shelf.

With 2 hours to go I started to prime the margin's which unfortunately didn't end up producing anything.  So the rest of the match was between the 5 metre and far shelf line.  I certainly didn't need 3 keepnets when the all-out was called.

The funniest part of the day had to be Sconey singing to No Hope, especially when it was clear he was going to get a red-shirt from BNF!  "oh just one cornetto...." and then some dodgy lyrics, most of which cannot be repeated!

The Result
13lb 14oz, 2nd last in section.  Top result for BNF who took the section win and presented a double shirting, one to Colin Merce and the other to local venue expert Paul, aka "No Hope". 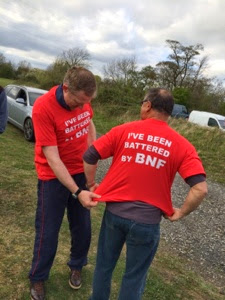 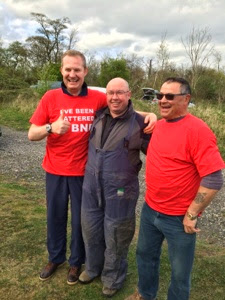 Conclusion
The weather didn't turn out to be as warm as anticipated.  The side wind made presentation, even at 14 metres tough.  The fish were certainly splashing about but weren't feeding as expected.  Overall weights were down for Janson's which was a shame as I'd put 3 keepnets in the water ready for a bumper day... 2 were out on the bank drying by the time the whistle went!