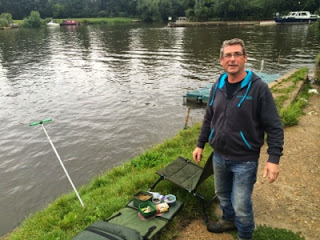 Something a little different for the blog. My good mate Dave Speller, most of you will know him as Shedders or those that attend the Withy weekend; Spiderman, enjoys a bit of river fishing for Barbel and whatever else comes along.  He can be often found with the other gentleman, Jaap Stam "of West Ham", either on the river or playing darts!

So, as I wasn't travelling with work this week I thought I'd sent Shedders a text to see if he would kindly take me Barbel fishing one night this week.  My chance came earlier than expected and we set a date, time and place.  I met Shedders down on the River Thames near Shepperton Lock.

Now, it has been over 20 years since I fished a river and I've never caught a river Barbel before, so I was looking forward to the evening's events.

The Set-Up
No need to lug all the match gear around and Shedders had kindly offered to bring a rod set-up for me.  I decided to take my small spinning rod that was purchased when I lived in Australia to try for a Perch, Pike or maybe a Zander... 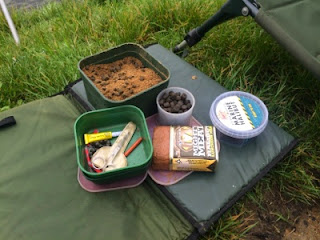 Two Barbel rods, a Grey's Prodigy 1.75lb test curve rod and a Shimano Specialist rod, both equipment with bigger reels than normal loaded with 12lb line (Shedders, you'll have to confirm this is right).

At the terminal end was a simple running feeder rig, although these feeders were, er, slightly larger than I would normally use, 60g buckets more like it!  A long fluorocarbon hooklength of 0.30 line to a large hook with a long hair rig.

Bait tonight was two large 15mm halibut pellets on the hair rig, wrapped in a krill-halibut paste.  For the feeder some halibut ground bait together with mixed halibut pellets.  It was a bit stinky to be honest!

The River
We were fishing the river in the large slack area and casting out about three to four rod lengths, although in the dark I really didn't know where the feeder landed to be honest!

We started the session around 6:30pm while it was still light.  The weather wasn't too bad, a bit of rain early on, but apart from that a pleasant evening. 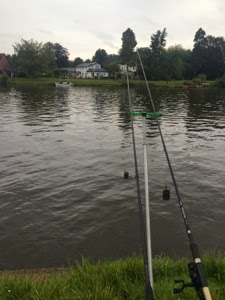 Casting was a lot different to what I am used to... more of a gentle lob with all the weight of the feeder and the resultant splash!  We settled the rods and waited for any indications.

Traffic on the river was quite light with a couple of canoes, scullers (not the drinkers!) and row boats.  A few times we had to drop the rods in case any of the boats came a little too close.

While waiting for an indication I was using the spinning rod to try and bag one of the many predators in the river.  Unfortunately this resulted in no takes all evening.

There was also a guy was fishing down stream of us with a light waggler setup and was catching plenty of small silverfish which was great to see.

We left the rods out for about 30-40 minutes at a time.  It was quite clear when some debris caught the line as the rod would nod in a very predictable pattern.  Dave mentioned that a bite from a barbel would be quite noticeable with a large lunge from the tip, coupled with the hair rigged bait, the fish would almost hook themselves.

As the light faded we put some red starlights on the rod tips.  As the darkness developed, bats hunting close and low to the river for insects would catch the line and the tip would do  merry dance... we named this the "bat line" ;-)

Around 9:45pm, Dave's tip started to nod and he was into a fish.  He called a Bream given the lack of fight it initially put up, as he got the fish closer it woke up and started to give a decent account of itself.  With our torches lighting up the water, the fish surfaced and was soon in the oversized net.  It was a large bream.  Out with the scales, 7lb... 6lb 14oz, 7lb, and then settling on 6lb 15oz.  A quick couple of pictures and back to the river the fish went.

A couple more casts later and it was past 11:30pm, so we decided to pack up and head back.

The Result
Shedders with the only bite of the night landing a lovely 6lb 15oz prime River Thames Bream.  It was nudging the 7lb mark but the scales settled that vital ounce underneath ;-(

I wasn't bothered about blanking (I know some of the readers will slaughter me for it), I had enjoyed the session and learnt a lot in the process.

Well, I've decided to buy some carp gear to also target the larger specimens, so I think I'll add a couple of barbel rods to the shopping list for some more evenings down on the river!  I'll also need a head torch too as holding the torch in my mouth while bringing Dave some welcome peace and quiet was a bit uncomfortable!

Cheers Dave, looking forward to the next River Monsters session!

Anonymous said…
Is that the channel above Walton Bridge Bridge Mark(Desborough)?Good write up but watch out for the "Doggers"lol.
4 September 2014 at 10:03