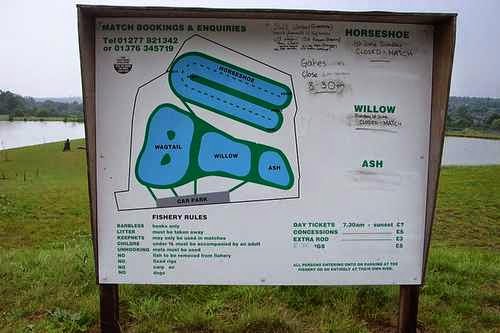 With winter time being well and truly upon us I decided to fish a match at a new venue, one which has quite a reputation for large bags of carp in the summer and also in the winter.  I wouldn't be disappointed visiting Tylers Common in Essex.

The weather was horrid!  That constant drizzle where it just doesn't stop... both the gear and me would be getting wet today!

Arriving a little late, quickly putting on the waterproofs, I met up with the lads and the draw got underway for Willow Lake.

The Draw
Out of George's drawbag full of bingo balls I pulled out peg 22 which is on the bank nearest the car park.  An easy walk for the day, just have to negotiate the hill which of course I didn't and my trolley tipped over dumping all the gear on the deck.  Disaster number 1 for the day!

The Set-Up
I'd brought my method rod after reading an article in the Anglers Mail, but it was clear that today we would be fishing the pole, so the set up was really simple:

Bait again was simple, pellets, corn along with some dead reds just in case.

The All-In
To kick the swim off I potted in some 4mm pellets and went straight over that area with my rig and sweetcorn as the hookbait.  The float buried once it settled and I was straight into a fish.  A small carp was soon in the net.  Going back over this pattern repeated itself and before I knew it I had around 6 fish in the net within the first 15 minutes.

A quick glance at other anglers around the lake and they were doing the same, netting fish all around me.  It was going to be a fish race today I thought to myself.

I was cupping in 4mm pellets every 5 fish, feeding like it was summer time, although it was a cold 7 degree's and raining...

A few issues with shot coming off the line, but the sport was pretty constant.  After missing a couple of bites I changed to some dead red's which resulted in small roach, so back on the corn trying different ways of hooking it to try and hit the bites.

I had a spell of around 20 minutes where I just could not hit the bites.  A quick re-plumb, rig adjustment and the fish started coming again.

The match soon went by and George called the all out.

We weighed our section in, George was the first to way with 160lb, I didn't think I had that in the net!

Conclusion
I noticed a lot of the lads where fishing on their top two, meaning they would get the fish in quicker.  I felt my top two line depth was too shallow, so stuck on my line.  Feeding was frantic!  What a great winters venue, so I'm booked in on George's March match for some more Tylers Common action!

Getting back to the car I discovered that my waterproof's where very efficient and the pocket I had my iphone in had filled with water, result, one knackered iphone, thus the generic photograph!  Disaster 2!

Disaster 3 was the journey home.  The weather had caused an accident on the M25 and I diverted off only to get stuck in stationary traffic for 40 minutes due to a broken water main!