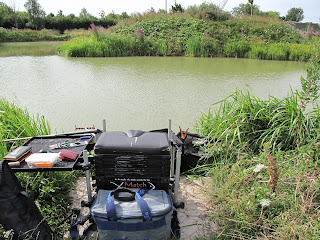 The annual 2 day event at Peb's place, How End Fishery.  The fishery is going from strength to strength with the fish getting bigger and more importantly, wiser.  Another event that I simply cannot miss as two days away with the lads, overnight BBQ and beers with everyone makes this weekend brilliant!

I arrived at the fishery around 8am ready for the draw to be greeted by a load of the lads.  The weather was absolutely fantastic, definitely a T-shirt and shorts day!

The Draw
Dani's, Peg 15 came out of the bag for me, a great method peg!  My partner for the weekend would be Baz, but we still had a side bet of a golden nugget across the days!

The method rod came out the bag and that was me done!  I'd bought some casters, worms, mixed maggots, sweetcorn and some pellets (micros and 4mm).

The reeds in Peg 15 were quite overgrown and didn't give me an margin line.  In order to get the three nets in I had to do a bit of gardening and was lucky not to go for an early bath!


All-In
I primed the 13 metre line with some chopped worm and caster.  This line was just in case the fish weren't having it on the method line over to the island.

Casting short of the mud bank on the island to start with as I didn't want to push the fish out of the swim I wasn't getting many indications at all which was a worry.  Last time I was on Peg 14 the tip was flying round.  I was recasting every 5 minutes to get some bait in the area with sweetcorn as hookbait.  After the first hour I only had four carp in the net...

The reeds which have grown significantly on the left side of the island where twitching away, so I decided to reclip and cast to the reed line.  This brought an instant response and now I was starting to put some fish in the net.

Alan Oakes to my left was catching well using paste on his long pole line.  Brian next to me wasn't having so much luck.

Fishing for about three hours on the method, the line died, so I decided to try my close in line which had been hand fed with casters through out the match.  I winkled out some silver fish from this line and decided to go back on the method and the reed line for the rest of the match, casting where I could see the reeds twitching.

Of course I did end up in the reeds quite a few times, much to the amusement of Brian next door.  His method feeder sounded like a bomb going in!  Karma soon paid out on Brian and he got caught in the reeds too!  Get some casting practice in matey!

I was having a good run of fish and then nothing.  The all-out was called and the day was done!

Result
49lb, 5th on the lake which was a disappointing result for me to be honest.

Conclusion
The first hour casting around the mud line and to the right of my peg produced very little.  In hindsight, had I gone to the reed line earlier maybe I could have improved my result.  Nonetheless we all had a pretty good day and the weather was excellent.  Now for the evenings BBQ and beers with everyone!