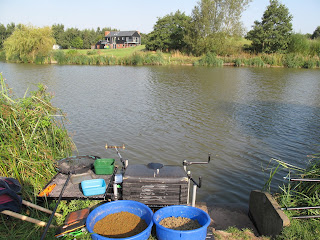 Day 2 and a few sore heads after a long night at the Longshoot.  Pool 1 had fished very well yesterday with all but one angler getting a 100lb plus net.  Weights on the other pools were well down  with some top anglers catching low weights from know good pegs.

Again, Sconey had the draw all ready and today would be the 2 vs 2 round.  Paired with Sconey against the ever lovable Pikey and Hathers.

The Draw
As expected everyone wanted to draw on Pool 1.  I drew for our 4 pegs and we were all really pleased to see Pool 1 on our peg numbers.  I was very pleased to be on Peg 12, the peg next to my previous days fishing.

Set-Up
The feeder rod was still clipped up and the right distance.  I decided to also set-up a bomb rod for bomb and pellet as Chris Martin caught well on it yesterday.  Again, 5 metre line and a lovely looking margin line to my right.

All-In
Taking a learning from yesterday and Neil's (NS69) great start from the 5 metre line.  I started there and bagged a few early fish.  After 30 minutes this line had slowed so it was out with the bomb and pellet rod after priming the line with some 8mm pellets.

The rod was just on the rest and the tip flew round with an angry small carp.  I was catching well but the fish weren't large, so I changed to the feeder line which as the previous day was alive with fish!

I couldn't see Hathers, Pikey or Sconey so the craic was a bit quieter than normal, but it didn't stop any mikey taking... Sconey was catching crucians and ended up singing a song about it, nothing new there!

After a couple of hours I was up on Hathers in the fish race.  My feeder line was working well with a fishing coming to the net most casts and the bites almost instantaneous, my arm was aching, Hathers had zero sympathy for me ;-)

3pm came round and I started to prime the margin line with sloppy groundbait.  I was hoping to bag some large carp from here as Chris did on the previous day.

I was casting well with the feeder and dropping it on the spot.  No catching Roy's chicken's this year Pikey!

With two hours to go I had lost a couple of fish on the feeder, so a change of hook length and then 5 more fish lost... what on earth was going on??  I changed the hook length again and got back in touch with the fish.

I had 35 carp on the clicker with a couple of silvers in the net too.  The final hour I had to have a look in the margin, even though the feeder line was fishing well.  15 minutes on the margin and one decent fish out of it.  Back on the feeder I thought and thats how I finished the match.

Hathers was catching up quickly on the long pole line with banded pellet and getting some good fish down the margins.  I could also hear Pikey netting fish so I didn't know what the result was.  I knew I'd had a very good day, I would only realise how good it had been once the scales came round.

Result
180lb 4oz for my best ever match result with 46 carp on the clicker!  I was over the moon even though Pikey had beaten me quite convincingly with 216lb 12oz!  With Pikey's result it meant that Hathers and Pikey had broken the previous two years deadlock and taken a Shandies win!

The Shandies had done the Munkees again, this time 6.5 vs 5.5 which gives the Shandies a 5 point lead going into the last day. 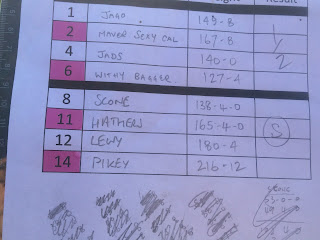 Conclusion
Another great day on the feeder!  Accurate and regular casting was the key.  To be fair I was able to catch on the bomb and pellet, feeder and 5 metre line, the feeder line I felt were better fish on a more regular basis so stuck to my guns.