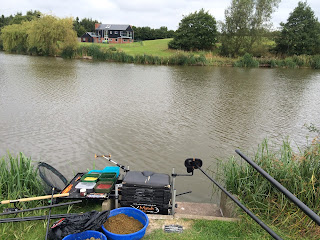 It was with great excitement when the alarm went off at 6am that is was time for the Munkees vs Shandies at the Glebe in Peckleton.  The journey up the M1 was a pain especially the 50mph "average" tax, sorry speed scamera's.  It was great to see so many of the lads at the draw and the competitive spirit was alive and well with plenty of banter.

The Draw
Sconey ran through the draw, already organised all the pegs with an 'M' on for Munkees and an 'S' on for Shandies... simples!  Today would be a 4 vs 4, section of 8 competition.

The envelope that we drew was for Pool 1 and Peg 11 would be my home.  My neighbours for the day Neil and Chris Martin so there would be plenty of banter.

Set-Up
My match plan was going to be keeping it simple revolving around the 5 metre line, margin and feeder.

The bait list was a little long but to cover the options.  Sweetcorn, hemp, dead reds, casters, worms, 2mm, 6mm and 8mm pellets and groundbait.

Going through the feeder would be a mix of 2mm pellets, casters and dead reds capped off with groundbait.

All-In
On the whistle, straight out with the feeder aiming for the space between two poles in the water... straight into the reeds!  Next cast, missed the target, next cast in the reeds again... Chris Martin next to me was wetting himself with laughter.  Finally I get the right cast with a lovely 'plop' of the feeder into the water and fish on!

Remembering my lesson with Andy Kinder, I was recasting every 2-3 minutes.  After an hour I had 11 carp in the net.  Chris had more though... Neil was having a bit of a nightmare and was loosing fish.

My feeder line was getting stronger especially as no-one else was fishing that line.  Chris was catching well on the bomb and pellet line.  At the two hour stage I decided to have a look on the 5 metre line, foul hooked but netted a carp, but I would go straight back on the feeder as the rule is you never leave feeding fish.

The casting was getting a lot better which I put down to using a 12 foot rod, the only issue was netting fish was a little harder as they didn't pop up under your feet as they do with a 10 foot rod.

I stayed on the feeder for most of the match as I was catching well on it.  The last 30 minutes I went down the margin on my left and took one large carp.  The all out was called and I knew I had over 100lb of fish, lets see what the scales say...

Result
3rd in section for me with 126lb 8oz, but it was a Shandie win!  Well done Andy Day and Chris Martin for section first and second with 146lb and 143lb respectively! 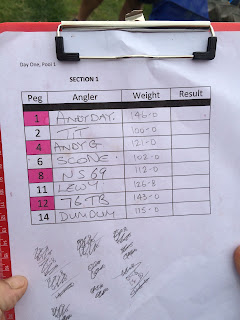 Conclusion
The feeder line was working for me, fish were on either as I was sinking the line to the feeder or very quickly after it had settled.  The mantra, "never leave feeding fish" was always on my mind, so I didn't.

A great result for me personally, but the Munkees lost this section.  In fact the day was a Shandies whitewash, giving the Munkees a good 6-nil kicking! 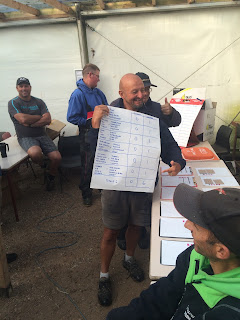 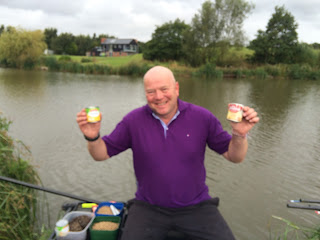 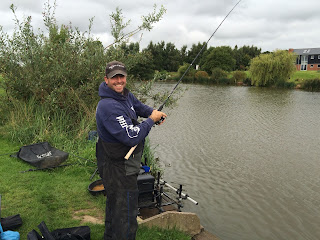 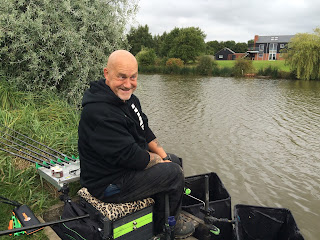 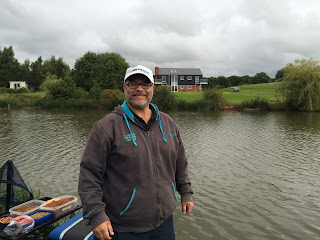 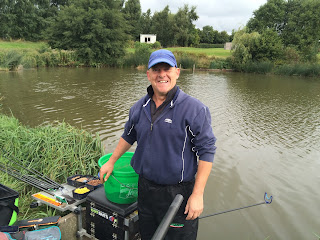 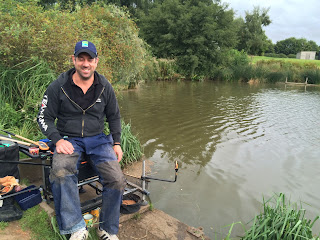