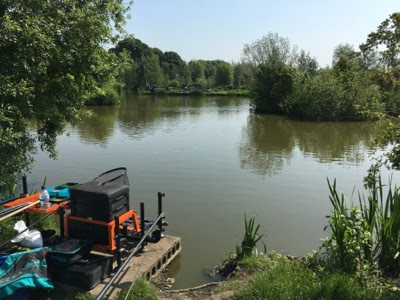 Day 1 of the Lindholme Angling Club 5 day festival, formerly the Maggotdrowners festival. Arriving on the Sunday afternoon it was great to catch up with the lads and to meet some new faces as the numbers of anglers had swelled to 50 taking part.

Last nights entertainment was mainly around my “special friend” Mr Bennetto who apparently is now the “king of tinder”, read into that what you like…

Dinner consisted of a chinese order from the only place that would deliver on a Sunday.  I must now make an immediate apology to Nathan as I took all the orders from the lads and forgot to call him to see if he wanted some food too... sorry mate!

Our accommodation had improved significantly this year with the addition of the lodges.  Wow, luxury, comfort and a decent show!  Thanks Keith!

We ended the evening having some beers with my lodge mates, Neilly, Sir Len and Ecky.

The Draw
Peg 41 close to the tackle shop which gave me a chuck to the island.  Neighbours for the day, Ian and Alan. 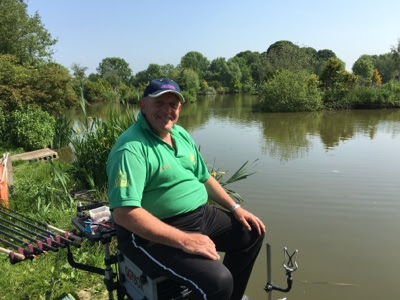 Set-Up
To be honest as I hadn't fished that much this year I was at a bit of a loss on where to attack this peg.  The method (hybrid) feeder to the island was the easy choice, my pole lines where:

Bait was mainly pellets, maggots, some worms (thanks Tex) and corn.

All-In
I cupped in some dampened micro pellets on my 13 metre line and started the match on the method feeder aiming to the left of the island dropping it short of the mud line so that the fish would not scatter along the banks.

Bites were slow but I managed a few fish in the first 40 minutes.  With the sun shining brightly and no clouds in the sky you could see some fish milling about on the surface I has been feeding the pole line with some 4mm pellets to see if I could tempt the fish shallow. 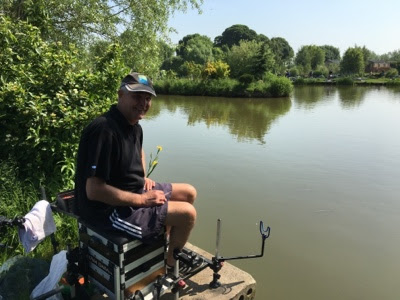 Switching to that line shallow I managed one carp after 30 minutes of trying.  A change to the full depth rig produced just a few skimmers, but no carp.

The islands reeds and over hanging tree were full of spawning fish so in an effort to get more fish in the net I decided on the risky casting to the big snag that was the tree.

The method feeder was loaded with 50/50 groundbait and micros with a 6mm pellet as hookbait.  The tip flew round for the next hour and I put a lot more weight on the scales

Bites slowed on the method feeder and I found that casting around required me to wait for around 5-6 minutes for a bite.

With the final hour and my method line taking longer to produce fish I had to tried the margins which only produced some small perch.  So I sat out on the method until the all-out.


The Result
47lb 2oz to take the section win.  The best start I can get to the festival to be honest in 6th place overall!  Will it last?

I know that I lost a pound to Gary with our "guess the weight" competition, I was well out guessing 39lb! 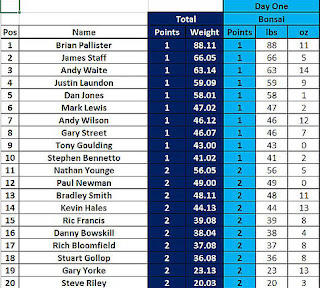 Conclusion
Sticking to the method feeder produced the fish for me and they were a better stamp.  The key was definitely the area of the island that I fished which of course was the most dangerous area for loosing gear.

Initially bites were pretty instant, but later in the match I had to wait it out for the fish to come.
Lindholme Lakes Matches