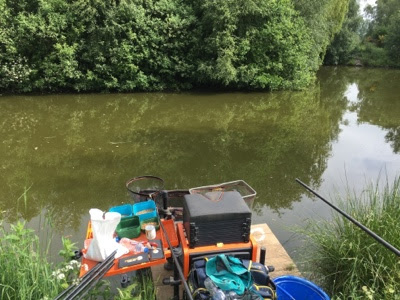 The Wednesday night normally has another name that is way too rude to publish here.  Lets just call it an evening of much drink and merriment!  We headed into Epworth and the local curry house

The Draw
There were 3 pegs left in the bag, one of which was a flyer... Peg 20, Beeches.  Gary gave me the tips on how to fish it and also piled the pressure on saying that I should win the lake from there!

Set-Up
The plan was simple... 16.5 metres across under the trees and a margin line.  That was it!

I set-up 3 duplicate rigs for across as I could foresee danger under the trees and one margin rig.  The across rigs would be banded pellet or worms.

All-In
Straight across to the far side kinder potting in micro's and working the rig.  No signs or indications for 10 minutes which was worrying.  Eventually that familiar waft of the float and first fish on!

Gary's advice after hooking a fish under the tree's was to bury the pole tip and ship back straight away to avoid getting caught up in the undergrowth.

I repeated the pattern during the first hour and also lost 5 kinder pots in the process!!!

My hand was then forced to heavily pot bait into the area as I didn't have any more kinder pots to use.  This had a positive result forcing the fish onto the
deck rather than shallow across.

I decided to change my hookbait to worms and also brought out the "suicide rig", 0.22 line straight through to a size 12 hook.

The first fish back over with the worm was a lovely perch of around a 1lb.  More fish came in the last  hour of the match with the long line getting stronger.  My final fish was a cracking 9lb 11oz mirror carp that lead a merry dance and some heartstopping moments with the tree line.  The All-out was called and I felt confident of a good result.

Conclusion
Thanks to Gary for giving me the inside information on the peg.  Very simple tactics, no need to change, just working the lines the best I could to keep the fish coming.