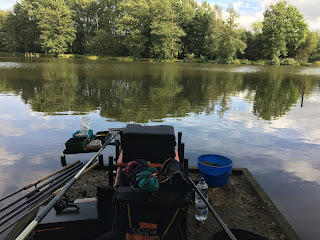 A upcoming match at Bury Hill Fisheries I decided that a bit of practise was required.  After all, my last session here was over a year ago and I didn't do very well at all.

The match will be a pairs event and Pat Pritchard is my partner for the day.  A quick call to Pat and he was available to come on down for the day too.  Pat's a bit of a good angler having just wining the MFS Champion's league final so any advice from Pat would definitely help come match day.

The Peg
Pat arrived a bit earlier than and headed down to Peg 40 so when I got there I picked Peg 41 with plenty of open water in front of us both.

The lines I intended on fishing would be the feeder line, long and middle distance and a couple of pole lines at 14.5 metres, 10 O'clock and 2 O'clock both fed slightly differently.

Bait for the day.  Expander and hard pellets (4mm and 6mm), dead red maggots and sweetcorn including a mix of fishmeal and special G Green groundbait.

The Session
The idea was to find out how the fish were feeding and where they were feeding, granted next week maybe a different ball game, but at least Pat and I would have a better idea.

The pole lines, the right hand line would be fed negatively and the left line heavily, so with that I potted in 3 balls of groundbait on the right line which would be left for a few hours without topping up. 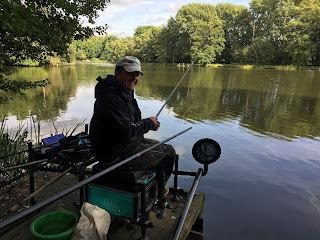 The left line was fed with 3 cups of loose groundbait mainly due to the depth of the swim.  Now to check the feeder lines.

I had set-up two rods, one method feeder and a normal cage feeder.  Starting on the method I chucked it a long way, around the 50 metres mark also choosing to leave it in the water for 5 minutes max in order to get some bait out there.

Pat also started on the feeder after potting in a few lines with loose groundbait and also a line with worms as a test, although with the amount of predators in the lake maybe this wouldn't be the main line.

After 30 minutes Pat had a few smaller skimmers and I had managed to unclip my method feeder line which didn't help with bites.  So I picked up the cage feeder and cast it around 35 metres, which was just short of half way.  Bait on both the method and the cage feeder was two dead red maggots.  No loose feed was in the groundbait.

Finally after an hour I had my first fish on the feeder.  I quickly topped up the left hand pole line with a cup of loose groundbait.  The feeder line became stronger in hour two and the bites were pretty instant.

Pat switched to the pole line and on his worm line landed a lovely bream, one that Bury Hill is famous for, at about 4lb. 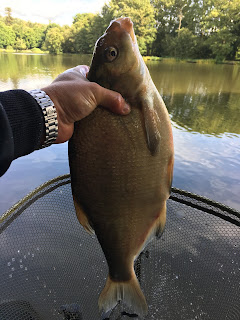 I moved onto the pole line with a 4mm expander and a few expanders in the kinder pot on the right hand negative swim.  Float dipped straight away and a lovely skimmer was in the net.  I managed 3 fish for this swim and then nothing, so I switched to the left hand line and the same happened, 3 fish and then nothing.  I topped up both swims with loose groundbait and fished for the rest of the day rotating the swims with some larger fish coming later in the session.

We packed up at 3pm and I estimate around 60lb of bream for the day.  Not a bad days effort.

Conclusion
The day has certainly helped my coming match plan in the following areas: 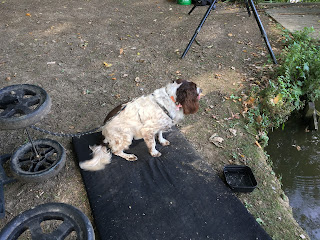 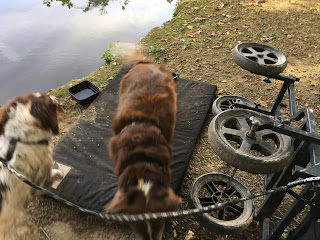