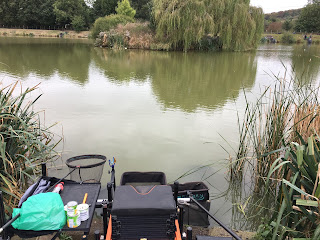 Carl had organised a two day event at Lake John Fishery in Waltham Abbey on the main, top lake.

Lake John is well know for its great head of skimmers and bream so after a great day at Bury Hill I already had a plan of attack.  There are also some very large carp in the Top Lake and should we catch any fish over 10lb they would be counted as 10lb only.

What we didn't expect over the two days would be the amount and size of the carp that would come out!

A great breakfast was quickly dispatched, thanks to the ladies who do a great job.  There was a mix of people I knew and some new faces, most of who were regulars at Lake John.  Plenty of tips were exchanged and it was time to draw.

The Draw
The little wooden cube with number 34 came out of the bag.  I''d been in this area, well, Peg 35 during a mini competition with my mate Mark in 2014.

Set-up
The island had a bare bank to target so the feeder rod was set-up.

Pole line I decided to fish two line short as the feeder would be my main line for the first couple of hours.  The first line was to the left sedges and the other was 5 sections to my right.

All-In
3 balls of groundbait on the right hand pole line and a single ball on the sedges line which would also be fed by hand with sweetcorn.

The bare bank on the feeder line was too tempting, so I started on this line short as to not spook the fish around the island.  The first hour I had four fish in the net including a couple of carp, meantime Chris Vanderveilt was catching strongly using the T-Bag casting close to the willow tree in his peg, he would end the day with a massive weight composing of 22 carp!!!

The second hour, the feeder line wasn't getting any stronger, in fact it had slowed down so I decided to change to my longer pole line.

A few silvers on this line but nothing substantial.  Looking on the sedges line again not much apart from some small silvers.

The match plan was in tatters, so I decided to feed my pole lines and sit on the feeder for longer in the hope of some carp to bolster my weight.

The final hour finally my longer pole line started to produce some of the great silvers.  The all-out came a little bit early for me to do any damage.

Result
48lb for 4th in Section.  I lost a pound to both Ian and Billo and thus, "Chip shopped", i.e. battered on both sides!

Conclusion
The silvers weren't showing in large numbers at all which was a surprise for Lake John, carp dominated todays match with some very large weights from Chris and Pikey.  I feel I had pushed the feeder line too much in the hope of success when I should have concentrated on the pole lines.  More tomorrow...