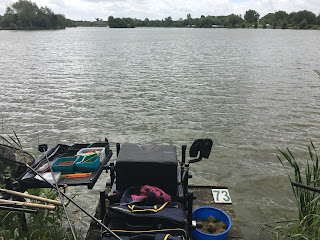 Back to Barston Lakes for a MFS Champion's League match, a good opportunity to get some practise in for the Match winners final later this year.

The Draw
I got a call from Pat 10 minutes before the draw asking if I was heading to the fishery.  I was almost in the car park when he called.  As JC said, I'm normally one of the first one there, today I was only one mile from the fishery yet I was one of the last one to arrive.  Sorry guys.  Anyway, Peg 73 was home for the day, luckily peg 74 was a redraw as one of the lads hadn't turned up so I had a lovely end peg all to myself.

Neighbours for the day were Big Ron on 72 and Daddy May across the bank.

Set-Up
The wind was right in my face so I broke out the method and bomb rod.  I wasn't planning on fishing long as when I'd arrive at the peg I could see some skimmers topping not to far out.

Pole line would only be a short line due to the wind so I set up top 2 +3 sections straight ahead with a 1.0g rig.  I also plumbed up a margin line to my left.

Bait was pellets, dead reds, caster and groundbait.  I had some worms but decided on leaving them on the bank.

All-In
Fishing 11am until 5pm, Andy Kinder called the all in and my plan was to pot in heavy on my short pole line and fish about 16 metres out on the bomb and pellet or method dependant on how the fish would be having it.

So 5 balls of groundbait laced with maggot and caster went onto the short pole line and I fished the first hour on the bomb and 8mm pellet.

First fish graced me with it's presence after 10 minutes and then a lovely surprise 10 minutes later with a lovely tench.  Next 10 minutes a nice chunky F1.  30 minutes in and 3 nice fish in the net, today was looking up!

Meanwhile, Ron was fishing paste on his short line and had started to bag up.  My next 30 minutes and 3 casts produced nothing, all the time seeing Ron putting skimmer after skimmer in the net.

On the hour I switched to my short pole line and the float shot straight under so my next hour was pretty much like Ron's almost a fish each put in.  The wind started up and the fish backed off, so I topped up with a couple of balls of groundbait and tried the method on the 16 metre line.  Bites too around 10-15 minute mark although it just didn't feel right.

Back on the pole line and I was catching a few better skimmers, although the pattern was different, 2, maybe 3 fish and they would back off again.  Another ball of groundbait fish around the area and 10 minutes later they'd be back again...

Ron's short line had also died back.  The wind was really gusting making presentation almost impossible so I decided to top up the pole line with some more groundbait and fish the method out about 20 metres.

Bites were taking a lot longer and I also lost a few fish.  The next 90 minutes was very frustrating with little going in the net.

The last hour, I'd primed the margins, had a quick look, nothing so fished out my short pole line.  The pattern now was fish, top up with groundbait, fish, groundbait, etc.

The closing 15 minutes, the float buried and the elastic shot out and off towards the middle of the lake.  I saw a rather large fin in the water and it was a large carp.  The next 15 minutes were very tense with me missing an opportunity to net the beast.  It was a big mirror, that was plodding around the swim.  Finally I got its head in the landing net and the all out was called.

Conclusion
The big carp won me the section in the closing 15 minutes.  The pole line was definitely the line to be on however the wind made it very tough to present a bait.  A great day with mainly a net of silvers and one lovely mirror carp, plus I managed to christen my new keep nets ;-)

Top bombing to Andy Kinder for the win and thanks to Paul Law (JC) for running the match.