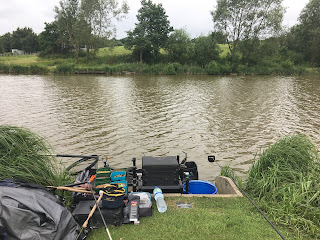 The first time I'd fished the Hillbilly Pairs which is very generously sponsored by Neil of HillBilly Floats.  Check out his webpage for some fantastic hand made floats.

The event takes place over two days and you are drawn a random partner.  The might of the MFS massive were all gathered at the Glebe.  On the other hand, I was late as my journey there was a bit more interesting with a tyre pressure warning light telling me my back right tyre was down on pressure.  A quick pit stop to the garage to fill it back up and I was at the fishery.

The Draw
Organised by Mr Andy Kinder and the lovely Sarah, the first name out of the hat would be fishing on Pool 1, the next name would then be your partner and they would be drawing for Pools 4, 5, 6 or 7.

My name came out the hat and my Pool 1 draw was peg 14.  Steve Wynn (SWB) was next out the hat so had the unfortunate pleasure of being my partner...

Set-Up
The weather during the run up to the event had been very warm.  Today it was overcast and there was even the threat of rain.  There were fish milling about on the surface so the first thought was a mugging rig.  The pole lines were:

The feeder rod was also out of the bag as I had a good area to have a go at over on the far bank.  I also broke out the spray and pray method of the bomb rod.

Bait for the 2 days, dead reds, worms, sweetcorn and pellets (6 and 8mm)

All-In
Cupping in a couple of balls of groundbait on the 14 metre line the match plan was to fish the feeder for the first couple of hours to the boards on the far bank.  Casting every 2 minutes to get the plop of the feeder right and the bait going in bites weren't as often as I wanted.  In fact I was bringing quite a bit of debris back on the hook length most casts.  So, I shortened the line clip to try and get away from the debris.  After 90 minutes I only had 4 fish in the net and the wind was gusting quite badly.

2 hours had past and I still wasn't get the response on the feeder line that I expected so I tried the 14 metre pole line.  There was plenty of tow and wind which made presentation difficult.

A quick look on the 5 metre line and in the margin produced nothing.  Meantime Pete Bailey 2 pegs down was catching steady fishing at 14 metres!  I'd asked him after the match how he did it.  His answer is in the conclusion below.

My other neighbour was catching on the bomb and pellet quite steadily so I tried the same method with better results.

The fishing was tough, the 5 metre line wasn't producing and the margin was only giving me perch!  I fished the rest of the match switching lines, feeder, bomb, 5 metre, the odd attempt at 14 metres but I just couldn't get anything to work.

The all-out was called and I wasn't confident of a good result.

Result
31lb 13oz for 5th in section.  Pretty terrible start!  Steve also had 5th in his section so we were well down on the pairs.

Conclusion
The tow on the 14 metre line made it very difficult to fish.  I asked Pete Bailey how he had fished that length for most of the match.  His answer, banded 8mm pellet which acted like an anchor for his rig and hook bait.  He is a bit of a good angler is that PB!

I didn't get into any rhythm during the match and ended up trying to follow my neighbours, switching methods, getting more response on the bomb and pellet which was unexpected to be honest.  A terrible weight from a reasonable peg.  Must try harder! 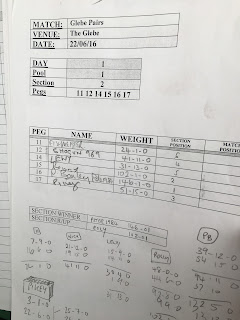