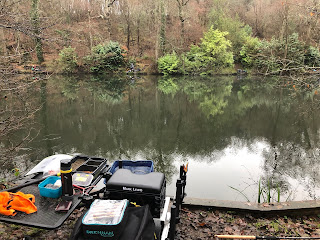 Since moving from London I decided to join to local clubs which basically gives me most of the waters within a 30 minute radius to me.  I've fished quite a few matches with the Farnham guys, time to fish a match with Godalming Angling Society or "GAS".

The stunning Wood Lake Christmas match was in the calendar and a quick email to the Roger, the match secretary and I was on.  Roger emailed back with the latest form from the lake and also advice on what bait to fish and methods.  Thanks Roger, very welcoming email.

The Draw
Gathering at GAS headquarters to pick up keep net and landing nets I drew peg 31 which is on the right hand bank from the car park.  There would be 23 anglers and once we arrived at the fishery there was very little space in the car park. 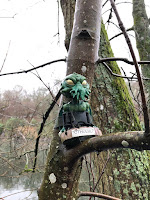 Set-up
Arriving at the peg the water was gin clear, I was also being watched my a demon in the trees... see picture!  Post Note:  This is Cthulhu, see more about him here https://en.wikipedia.org/wiki/Cthulhu

The water was that clear that I could see a small jack pike as I was setting up.  The margin's definitely would not be used today so it would be a rod only day.

The waggler rod came out, although casting was hampered by the trees to either side and my first cast to plumb the depth ended up catching a squirrel.

I also broke out a feeder rod that could double as a bomb rod if required.  I had heard that a bomb and corn cast to the middle of the lake could produce results.

Bait was all natural, maggots, casters, sweetcorn and a small amount of dark F1 ground bait for the feeder.

All-In
I didn't have a match plan for this new water beyond watching what the locals are doing.  I was going to fish the feeder to the middle of the lake to start with while pinging out casters on my waggler line, it was really that simple.

The first hour was spent on the feeder which resulted in a lovely bream of around 4lb, a great start to my Wood Lake campaign.  The guys around me where swapping between the feeder, bomb and waggler and fishing mostly towards the middle of the lake. 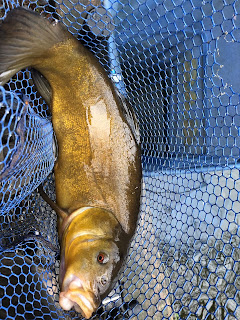 The gentleman on peg 30 had a couple of tench on the waggler pinging out what I can only assume were casters.  Time to try the same approach.

The waggler setup was a 2.0g Drennan Number 2 vizi wagg and it was very telling that the lake while it appear flat calm had quite a tow on it with the float trotting through to my right quite quickly.

I added about 6 inches of depth to the rig in an attempt to slow it down, finally adding about a foot in total to get the right presentation.

The float was moving through the swim with triple dead red maggot on before it quickly dipped and I was into a lovely tench at around 4lb also.  What a sight to see in the middle of winter, that lovely bronze flank and teddy bear eye of the tench.

The next few hours the waggler remained pretty motionless however peg 30 was into some more fish.  He was to end up with 6 fish by the all-out.  The word on the bank was that one gent has into the bream around the pegs in the 40's.

I changed tactics putting on a small bomb to replace the small feeder.  Baiting up with some corn and plopping it mid way across the lake.  As I was sinking the line, the tip flew round and my next 4lb tench was on and soon in the net!

The final few hours I didn't manage any bites and the all out was called.

Conclusion
Wood lake is certainly a beautiful setting and contains some cracking fish especially for winter time.  The winning weight was 29lb with a net full of bream.  The gent on peg 30 next to me had 15lb for his 6 fish.

Only one person fished the pole to reach a far margin however it didn't produce anything.  My bank fished better than the far bank and the methods were most definitely waggler and bomb/feeder approach spraying casters over the line.

A great bunch of guys who I look forward to fishing with again in the new year.
Godalming Angling Society Matches Wood Lake