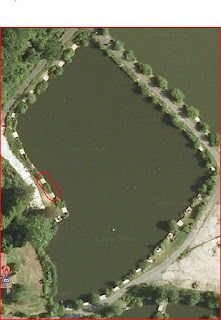 Continuing the Mark vs Mark competition, Mark headed on down to London and we decided to fish Gold Valley on both the Saturday and Sunday.

As we are fishing the open match at Gold Valley the Sunday which is across Bungalow and Gold, we decided to fish Bungalow Lake as we hadn't fished that lake before.  It would be a good opportunity to practise a couple of methods and to see how the fish would react especially given the very cold weather experienced in the week prior.

We asked some advice at the tackle shop and they pointed out the area we should be fishing in.  Highlighted on the map of Bungalow lake.  Mark selected the peg closest to the corner and I went to his left.


The weather for the day was a rather mild 11 degrees C, the wind was gusting from left to right, but our pegs were quite sheltered from the wind.


Bait for the day would be fishery pellets, 8mm to be banded and 6mm in a small PVA tee-bag, krill maggots (see video below), sweetcorn, casters with a selection of high visibility 10mm boilies.  I dropped a PVA tee-bag of pellets in the margin and it took around 5 minutes to break up, so I opted to clip the tee-bag to the lead rather than the hook, to give me more fishing time in the water.  A tip that Will Raison gave in one of his video's. 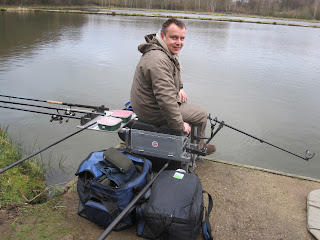 I had decided to use the day to experiment, so I set up the pole to be fished at 13 metres equipped with Daiwa Blue Hydrolastic, bomb rod and my method rod was in the bag already setup, so I took that out also.


Mark also set-up his pole and a bomb rod which he would interchange with a maggot feeder.


The All-In
We started our session at 9:15am and would fish through until 3pm and weigh any fish in the landing net to get an approximate weight for the day. 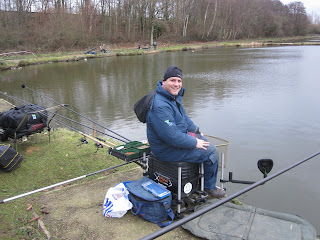 I started the 13 metre pole line off with a cupped in ball of Marukyu EFG131 groundbait along with a pinch of krilled maggots, casters and a couple of pieces of corn. I then settled down on the bomb and pellet towards the central rope and would recast was aiming to recast every 20 minutes.  The pole line would be topped up every hour, the aim was to go on the pole line towards lunchtime if no carp had appeared.

Mark's first cast, to further fine tune his line clip was to the rope and didn't have any bait on the hook at all.  Much to his surprise as the bomb hit the water a fish was on... he landed a beautiful 1.5lb Perch which was hooked perfectly in the mouth...

Meanwhile, my first fish on the bomb/pellet was a skimmer of around 1lb.

The action was quite slow and Mark soon increased his lead landing a lovely 5.5lb common carp.  After 2 hours switching between the bomb and method I decided to give the pole line a try which was the right decision.  Initially using krilled maggots as bait I netted a few nice roach, rudd and a roach/bream hybrid, then the bream turned up, the best of the day being a 3.5lb dark bream that had it's spawning nodules showing.

Mark had landed another couple of carp, but the action wasn't frantic.

So with an hour to I was a couple of pounds ahead of Mark and then he landed another carp taking him to 21lb in total for the day.  My weight counter was showing 16lb so if I could winkle out 3 more 2lb bream from my swim I would snatch victory.  The light conditions where very testing and it was very difficult to see the pole float and I managed only 2 more fish...

The Result
Mark had taken a well earned victory with 21lb, I finished with approx 19lb.

Conclusion
In winter time, don't forget the silvers!  Mark had 4 carp, 1 large Perch and a couple of skimmers.  My entire net was made up of skimmers, bream and other silvers and it was a close finish.