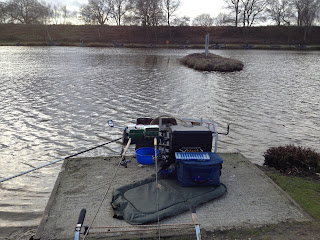 The first match of 2012 an open match at Gold Valley fished on the Causeway Bank of Gold Lake, Speci and Bungalow Lake.

The previous day we had practised on the Bungalow Lake and the lesson learnt for me is "don't forget the silvers"
We got to the fishery at 8am, ready for an 8:30am draw.  Mark was a little nervous as this would be his first ever match.  The field of competitors was quite large including a certain world champion, Will Raison.

We grabbed a cup of tea and a bacon buttie which kept us going.  The orderly queue to draw pegs started.  I managed to peg on Gold Lake while Mark had pulled out a peg on Bungalow Lake and he would have world champion Will Raison as his neighbour.  How about that for your first match, nothing better to help settle the nerves ;-)

So we wished each other luck and headed off to our respective lakes.

I was at the bottom end of Gold Lake where the wind was blowing and I had an slim island directly in front of me.  It had some slack water which offered protection from the wind and an added bonus of the winter sunlight directly on it.  I fancied some fish from this area!


The Set Up
As the wind was quite strong I set up a 6 metre pole line as any longer would make holding the pole very difficult.  Using the same rig as the previous day with Daiwa Blue Hydrolastic.

I set up the Bomb and Method rods and was all ready for the all in with a good 15 minutes to spare.  The bomb rod was clipped up to 5 turns from the rope.  The method rod was not clipped up as I intended to use that in the slack water close to the island.

Using a bait tub of lake water, the PVA bags of pellets were taking around 5 minutes to breakdown.

The All-In
I fed the pole line by cupping in a ball of groundbait, which contained krilled maggots and a couple of grains of corn.  I would top up this line every hour waiting for the fish to be confident while keeping an eye out for any activity in the area (bubbles from feeding fish).

The first cast I put straight out to the ropes and waited, setting the timer on my phone for 45 minutes.  After 20 minutes the tip had a gentle pull, then back again, a few more gentle pulls and then a quicker pull, I picked up the rod and was into one of Gold Lake's resident carp.  Taking my time, I put the net under a healthy 9lb common carp and my nerves had settled.


I went back on the bomb line and remain biteless for the next 45 minutes.  Time to top up the pole line, so I cupped in another ball of groundbait.

A further cast to the rope saw another fruitless 45 minutes, so I topped up the pole line early and picked up the method rod to have a cast around the island in the slack water.  I got one knock on the method line in the deeper water to the left of the island, but nothing more.

Time to try the Pole line.  the wind was making it very difficult to present the bait well.  I ended up hold the pole tip under the water which helped the situation somewhat.  My neighbour to my right had started catching some large skimmer bream.  After an hour, no bites, the sun was hindering my ability to see my float at all I went back out on the bomb line.

I hooked another large fish which ended up being foul hooked as my rig came back with a large scale attached.  20 minutes before the end of the match, my tip went round and in return I had a skimmer in the net.

The Result
Mark's day had been tough, he had only landed one carp for 8lb 8oz, I'll add his account of the day when he writes it.

The scales came to me and I registered 10lb 10oz, at least it's not last as quite a few people on Gold Lake failed to weigh at all. 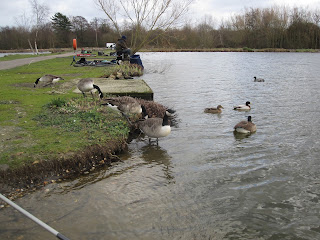 I don't know what I could have done differently to be honest the results from the first 6 pegs on Gold Lake where from 10lb to 25lb it was quite clear that the fish just weren't having it.  I learnt from the gentleman next to me (Mick) that he had used bloodworm in his groundait which he believed could have accounted for his good net of bream, whereas I had nothing on that line.

I enjoyed myself and am considering fishing more of the open matches at Gold Valley as the group of guys that go along are all very friendly, helpful with advice, the matches are well run by John Raison and after all it's not every day you get to fish next to a world champion!
Gold Valley Matches
Location: Gold Valley Lakes, Aldershot, Hampshire, UK