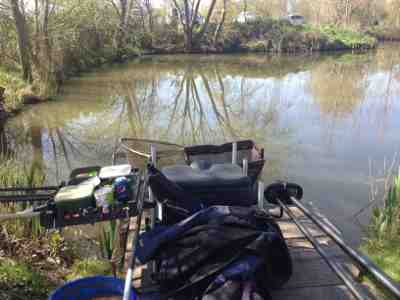 A beautiful day awaited the whole of the field, blue skies, sunshine, but very little wind, which of course meant no ripple on the water.  The previous night was a big night for the lads with two lodges worth of booze consumed, this of course resulted in some very soar heads in the morning.

The Draw
Peg 43 came out of the drawbag for me.  This peg is at the top end of the lake in a bay on the left handside with a very short walk from the car.  Arriving at the peg the water was dead calm and there were a few carp lazing about just under the surface.

The Set-up
On my left I had a long margin swim but was restricted on my right handside margin with a tree in the way.  I brought out a method feeder and pellet waggler rod just in case but the main pole lines were as follows:
Bait options were sweetcorn, luncheon meat, 4 & 6mm expanders with 6mm feed pellets and I mixed some groundbait to pot in on the margin lines.

The All-In
Cupped in loose groundbait on the 8 metre margin line and some 6mm hard pellets on the open water swim and pinged some pellets over the 14 metre margin line.  I wanted to try and bag a cruising fish so picked up the pellet waggler and had a few cast around near the fish but they simply weren’t interested.

Trying the 14 metre open water line, after 20 minutes of lifting and dropping both sweetcorn and expander pellet, nothing...

Over on the long margin swim, nothing... I was running out of options and the first hour was nearly over, so I tried the method over to the far bank, nothing...

After the first hour I hadn’t had a bite and no fish.  Meantime Tex (Pete) and Paul (PaulN) had both caught fish.

I topped up the 8mm margin swim with loose groundbait an continued to flick meat and hemp at my right hand margin feet.  Dropping in on the 8 metre line the float was swirling around so it was clear fish were present and the float soon went and the first fish was in the net.  An hour later and I was getting a steady stream of fish which helped the confidence after a disapointing first hour.

The 8 metre line was starting to die, so I topped it up and went long up the margin and grabbed a couple of fish.  After 3 hours into the match I started decided to try the swim at my feet which had been fed with luncheon meat and hemp.  With a single 6mm cube of meat I dropped it in and the float immediately went under and a very angry little barbel was on.

For the first 3 hours I had been putting fish in one keepnet, for the next 3 hours I would use the other net to see how the day had gone at the weigh in.

I continued to fish the 3 margin lines until the end of the match taking a couple of fish from each before moving lines.  The line that produced the best results was the one at my feet resulting in F1’s and barbel but no big carp showed at all.

The all out was called, time to see how I’d faired.

The Result
45lb 6oz and a section 3rd which wasn’t bad considering the first hour I hadn’t caught anything at all.

Conclusion
A tough day for many today, the lack of wind and therefore ripple had the fish just lazing around a few inches from the surface not really feeding.  Congratulations to Jim who amassed 70lb of carp on his top 2 at his feet feeding loose groundbait and fishing 5 dead red maggots landing fish to 12lb which also knocked me off the largest fish of the festival prize.