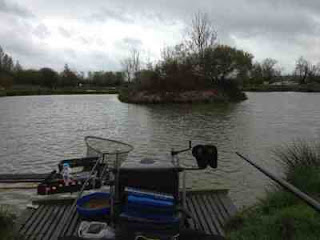 The Annual Withy event with the Match Fishing Scene lads this is one of best weekends I've ever had the pleasure of fishing/socialising especially after last years event.

The Draw
Peg 5 on Cottage came out of the bag for me giving me a great island chuck straight ahead and a long left hand margin swim to the corner where the wind was blowing into.  Neighbours for the day would be Sconey and Withybagger.

The Set-Up
The island was an great target area and I had plenty of room for pole lines, so I set up the following:

Bait for the day was luncheon meat, sweetcorn, dampened 4mm and micro pellets, 4-6mm expander pellets and some worms for the hook.  I also mixed up some dark sweet fishmeal groundbait to cup in loosely on the margin line.

The All-In
I cupped in some pellets and meat on my two pole lines straight ahead and went onto the method feeder for the first hour of the match.  Double sweetcorn was the hookbait and a double skin of groundbait and micro's the feeder was launched just short of the island.  I would re-cast the method every 15 minutes or so.  The island looked like it had a undercut bank and you could hear the fish slurping away, so the next casts were tight to the island and the tip soon wrapped around an a lovely mirror was in the net, but it had taken a lot longer than expected around the 90 minute mark.

Going over the long pole line it just produced skimmers and that then sparked Sconey and Pikey into more tunes..."Skimmers aren't enough, you curly haired geordie puff!"  A pair of bloody comedians very funny at the same time.

The 5 metre meat line also produced skimmers but they were a better quality so I stuck on this line until I fished it out and then topped it up with half a pot of meat.

The wind blowing into my corner margin was proving too tempting, so I cupped in two large cups of loose groundbait with some dead red maggots in them.  A quick 15 minutes on the method line and then I dropped a nice juicy large worm over the margin swim... it didn't take long and a lovely margin mirror carp was soon coming round to the net.

Topping up the margin swim with more loose groundbait a large mouth came up and slurped up the groundbait so straight back with another worm to tempt this margin fish out from it's hiding place...  This time it took a bit longer and a greedy skimmer took the bait first.  After another hour the fish finally took the bait and I was happy with another mirror carp as reward.

The final hour passed and no more margin fish, just skimmers on the 5 metre line.

The Result
The scales went round to 22lb 6oz for a section nowhere... Well done to Pikey for the section win!

Conclusion
The weight from Cottage were a lot lower than the previous year.  The weather wasn't too bad and the assumption by most is that the fish are getting ready for spawning, but hey, it was a great day and the craic was great!

Pictures from the evening's activities...
They speak for themselves!!!!