After a night of much merriment and playing pool with ladies underwear on... yes, that was the rules otherwise you were fined the Withy 2013 crowd gathered in the cafe for the final day of the weekend.  Again, the weather was cracking, bright sunshine with a few clouds in the sky, maybe not ideal angling weather but none the less I could top up the tan, sorry sunburn!

The Draw
I was going to be on the outer snake high numbers today and the draw revealed I was on peg 36 (I think).

The Set-up
Arriving at the peg, I had a great margin line to my right to the next platform, a 16.5 metre stretch to the far bank and the bridge over the gap between the outer and inner snake lakes.  Rolly wandered by and told me to set up a small pellet feeder and cast it to the bridge area, saying, "the tip will go round all day...".  So the set up was:


Bait was sweetcorn, luncheon meat, dampened 4mm and micro pellets and some mixed up groundbait to cup in loosely.  Neighbours today were Pikey and Pete Bailey. 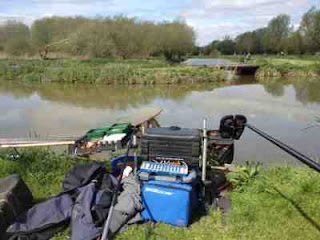 The All-in
Plenty of time to get ready and nip to the loo before the 6 hour match would start, I cupped in on my 5 metre meat line and then went over to the far bank, but not all the way over at first as I didn't want to spook the fish to the left or right of me...

Lifting and dropping the bait was key and I found that sweetcorn was working and it was a bit more reliant than expander pellets.  I used a kinder pot to drop some dampened 4mm and micro pellets on top of the float.  The first came soon after, a small skimmer.  Working this line for the first hour I had a few skimmers and one mirror carp around 5lb, but the bites were very finicky, so I decided to try and change to try and get some better fish.

Casting the pellet feeder to the gap between the snake lakes there were plenty of knocks on the tip and also plenty of debris moving across the line.  After 30 minutes and a couple of casts nothing... I thought Rolly told me the tip would fly round all day??? ;-)

Moving back on the long pole line I couldn't settle into a rhythm, but neither could Pikey next too me.  Meantime Pete Bailey had hooked a could of large carp by dobbing for them.  We could see the fish cruising but not really interested in a bait dangled in front of them.

With two hours to go I started to fill in the margins, both received two cups of loose ground bait and half a pot of luncheon meat.

After 15 minutes of messing about on the 5 metre meat line, which had produced skimmers, but no carp it was time to try my margin lines.  To cut a long story sideways, the long right hand land that all the lads said would produced gave me a single skimmer.  The left hand line I managed to take 3 carp and a large F1 from.

I ended the match still waiting on the right hand margin line when the all out was called.

The Result
24lb dead and section nowhere... Withybagger took the section honours with 88lb of fish caught over the far bank on pellet and meat.

Conclusion
I should have set up a shallow line on the far bank and lift and dropped while pinging a couple of pellets over it.  The margin lines are normally very productive here but they did not produce the goods for anyone in our section.

The main prize was the £1300 was raised for Cancer Research, top bombing boys!