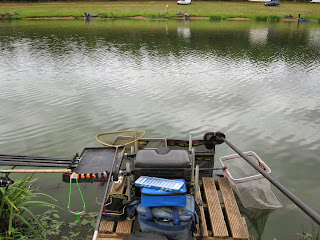 My third year at the MFS Larford Lash-Up... It's not all about the fishing, but the social aspect which means we are normally at the bar until late at night!  I arrived at Chateau Disney (Impney), quickly unpacked and headed down to the Robin Hood pub to meet the Thursday night crew.  It was great to see Paul (Animal) who has not really fished this year and the usual suspects, Col (BNF), Jase (Jadstar), Paul (NoHope), Jay (Pellethead) and of course Andy Kinder and Sarah.

It turned into a late night, topped up with a few beers at the hotel bar just to top us up.  Up early, breakfast and we all headed out to Larford Lakes.

There were however two late comers for entirely different reasons... Tonkin Tommy's satnav packed up and he ended up taking, well should we call it a bit of a detour?  A journey that normally takes 20 minutes turned into over an hour for Tonkin.  Then there was Steve May (Poolsfodder) who was stuck on the M6 due to a nasty accident for 3 hours...

The Draw
The queue formed for the draw, Andy called out all the rules and the hands started to dip into the pot.  I pulled out the Match lake, Peg 58 which is around the middle of the Burr bank.  Fish had been visible on the surface all morning.

The Set-Up
Larford Lakes is well know for the bomb and pellet approach so naturally I broke out a bomb rod set up and also setup the following pole lines:

I would also set up a pellet waggler later in the match.  Bait list was very simple, fishery 6mm and 8mm pellets, sweetcorn and expander pellets.

My neighbours for the day would be Bagger Rob Austin who I was having a pound with and I thought I had a spare 3 pegs to my left where Jo was sat but with 30 minutes to the all-in, Andy Kinder came along... oh dear I thought I was in for a tough match sat between Rob and Andy!

A special mention must go to Rob who thought he was on Peg 56, Specimen Lake so proceeded to walk the long journey round the back to the Speci Lake, only to find Doddy on the peg... he then realised he had drawn on the Match Lake... By the time Rob arrived next to me he looked absolutely knackered!!! 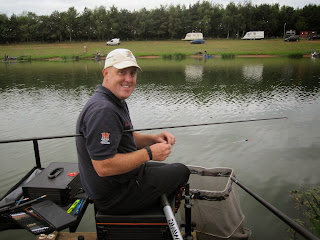 I cupped in 2 balls of groundbait with sweetcorn and 6mm pellets on the 13 metre line and cast the bomb and 8mm pellet out across 1/3 of the lake and started to ping 3-4 8mm pellets over that line.  The first fish came quite quickly a good angry carp weighing around 6lb.  My first hour past very quickly and I had got around 6 carp in the net including a couple of F1's.

During the match I had calls from Rob Austin and Jay from across the lake of, "Lewy, Lewy, Lewy"... in the tune of the Kaiser Chef, Ruby, Ruby, Ruby... this would continue most of the day to much amusement... cheeky b*ggers!

Andy Kinder was struggling to put some fish together and so was Rob, the fish were visible on the top and I decided to get the pellet waggler out, especially after Andy Kinder had also broken it out and Rob Austin was barracking me from my left... this in hindsight was a mistake and I should have stuck to the bomb and pellet approach.  After 30 minutes, one fish hooked and lost I decided to try the long pole line.

I started shallow pinging pellets over this line, while there were swirls of fish activity nothing eventuated.  Going back to the full depth rigs I started to get in touch with the fish again, but not in a consistent way.  Another hour past and I wasn't picking up fish.  The float dipped and eventually a good fish was on.  The elastic did its job and then disaster, the rig broke on what I can only assume was the floats spring eye. 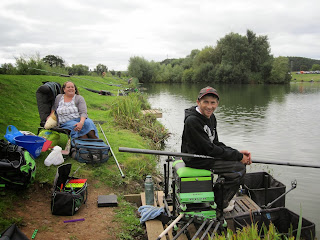 I had been dripping in corn on both margin lines and also in front on me on my top 2+2 line.  I decided to go into the margins to see if any fish were present.  After 10 minutes in both margins, no signs of fish so onto the top 2+2 line.  The float was dotted right down and the bites were the slightest dinks, but the fish were there and I started to hook up some good fish.  My corn hookbait helped to dot the float and to indicate I was in the right position just down the shelf. 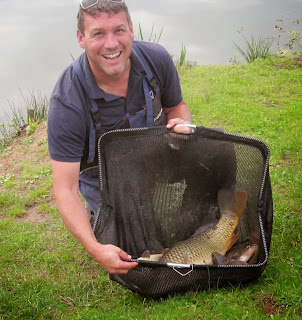 I stayed on this line but lost a large fish and the rig!  I quickly put the bomb out again while I re-rigged the pole.  I would stay on the top 2+2 line until the end of the match.  The all-out was called and I noticed my previous broken rig just near my keep nets so scooped it out, bonus... but had I done enough to beat Rob Austin as he had been catching steadily in the last hour.

The Result
73lb 5oz and a section 2nd.  Rob Austin had weighed in 76lb and taken the golden nugget by 1 fish!  Andy Kinder didn't fair so well which was to be expected with only 30 minutes to set-up.  I was extremely happy with the result.

Conclusion
Not to get spooked by Bagger Austin!!!  I should have stuck with the bomb and pellet approach to keep ahead of Rob.  The final word has to go to Rob after I gave him my pound, "Stick that in yer Blog!!"