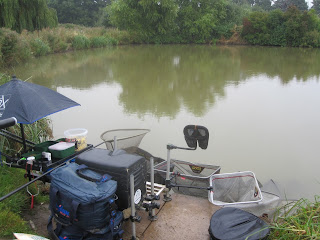 Day 2 which is a float only day and teams of 2 vs 2.  The weather had turned for the worse.  It was raining and overcast, probably an ideal day for the feeder to be honest!

Most were suffering from the previous night at the Longshoot!

The monkees were 4-1 up on the shandees and today there would be 10 points available for the winning teams.

I had been on peg 86 before back in 2012 for the Connor Whip Charity day.  It is known as the "little girls peg" so of course Pike and Hathers were taking the mickey, just a little...

The Set-up
I was thinking about setting up a pellet waggler but after a chat with Sconey and Roy Marlow it was clear that the 5 metre line would play a big part in today's match.  So I set up the following:

Bait today would mainly be hemp and corn, 6mm pellets and groundbait for feeding the margins.

The All-In
I set-up with 5 minutes to spare, normally I've completed my set up with 30 minutes to spare...  To kick off the 5 metre line I potted in a full pot of hemp and corn from height to make some noise and laid my rig out allowing the bait to fall back over the feed.  Pikey, Sconey and Hathers were into fish straight away, meantime I was still lifting and dropping my bait.

The first fish eventually came and black hydro went streaming out and an angry carp was in the net.  Sconey was off to a flyer netting 8 fish in 8 drop-in's.  In fact all 4 of us were into fish quickly.  All of us were pilling in the corn by hand.  I started to get a few foul hooked fish, so changed my approach to cupping in rather than throwing in the corn.

After the first hour I was getting into a rhythm of cupping in after every 2 fish.  Roy Marlow had mentioned to me at the draw that I should keep feeding as the fish are there and they hoover up the bait very quickly.  To be honest I'd never fed so much in my life, but it was working so why change it?

Next fish I hooked took off... black hydro streaming out of the pole but eventually I managed to get down to the top kit before it tore off again, this time it was too much and the elastic and float came back to me, but rather than the hook length breaking, the mainline (0.14) broke just below the pole float... so I needed to rig up an new rig.  Lesson learnt here, set up a duplicate rig for such a situation.

It took me about 5 minutes to re-rig and knocked me out of my rhythm.

4pm came round and I'd fed 4 large bags of corn so far.  I started to prime the margins as I could see fish moving about long down the margin.  My margin rig was on 0.22 line, size 12 with 2 pieces of corn hair rigged.  Dropping the rig in it started to move about a clear sign of fish in the area and I would wait until a solid quick bite to try and avoid foul hooking any fish.

The float went and I didn't have an opportunity to strike as the elastic started to stream out.  It was clear that it was a large fish as it was plodding heavily.  Getting the fish down to the top kit and taking some elastic back on the pulla kit the fish made a break for the keepnets on my right and I put a little too much strain on the whole set up and the top kit snapped at the number two section!  Trying to grab the broken top kit and elastic to steer the large carp, the hooklength gave way and my margin monster was gone!  Oops...

I set-up another margin rig and went back over.  There were plenty of fish showing, taking food from the top, but dobbing isn't allowed at the Glebe.  Pikey and Sconey were starting to plunder the margin's and Pikey was doing very well on paste to his left hand margin hooking a fish just about every put it!

I took some more fish but Hathers had started to struggle.  The banter during the day was hilarious between Pikey and Sconey  and a new term was invented, calling people a "Fringe" or a "BLEEP fringe".

The all out was called and I knew that Pikey had won our section.  Sconey and I really wanted a tie...

The Result
103lb from the little girls peg which was 1lb more than Hathers...

Team Result
We halved the points with Pikey and Hathers which was a fitting result as Pikey beat Sconey and I beat Hathers... just!

The Monkees only needing 7 points from the 20 on offer tomorrow to secure victory.

Conclusion
I should have gone to the margin line a lot earlier, simples.  The 5 metre line was producing and I was reluctant to leave feeding fish