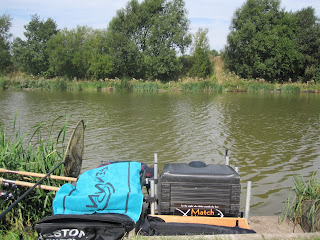 3 days of fishing at The Glebe ahead with 39 other Match Fishing Scene members, fishing heaven in my mind!  To top it all some of the MFS Jocks would also be there at the same time, bonus!

A 3 day event like this especially at a fishery with a reputation for the amount of tins of corn anglers have fed presented a challenge to ensure I had brought the right baits and plenty of it, better have more than not enough...  the bait list was:

For the final day I'll tell you what I used and what I came home with...

I arrived the night before at the Bosworth Hall Hotel which is only a 15 minute drive to fishery so it was great to be able to have an easy morning, i.e. a sleep in and a relaxing breakfast.

It was great to see plenty of familiar faces from up and down the country, it didn't take long for the mickey taking to start... this would of course, continue for the next 3 days!

The Set-up
Day 1 was feeder and bomb only so the set-up was pretty simple, I set up two identical rods and set-ups and both interchangeable for either a feeder or a bomb.

I mixed up two bags of EFG151 and would use this for the feeder with some casters and pellets and also to prime the margins later in the match.  Hookbait would be banded 8mm pellet or hair rigged corn.

I clipped up tight to the boards and also a couple of yards short.

The All-In
Sconey shouted the all in and feeders where launched by everyone with a couple hitting the far bank and others looking for squirrels!  I decided to put 8 feeders out to put a bit of bait down and then recast every 5 minutes.  After 15 minutes the tip finally went round and the first carp was making it way to the net.

After an hour I had 4 fish and they were only small... I decided to start casting right to the boards and the first cast went straight up the tree!  The whole rig stayed there so while I was tackling back up I quickly picked up the bomb rod, changed the bomb for a feeder and I was fishing again with no delay.

The plan today was to fish long for the first 3 hours, if that didn't produce fish to fish the long pole line length with the feeder and in the final couple of hours to prime the margins and 5 metre line and drop over it.

The weather today was bright sunshine and fish where topping all over the place, it would have been perfect for pellet waggler and pole, but today that wasn't allowed!

Fishing to the boards wasn't producing bites, but fishing to the reeds on the right was.... but I still wasn't catching well... casting on the pole line didn't produce either like it was for Ben on the left... 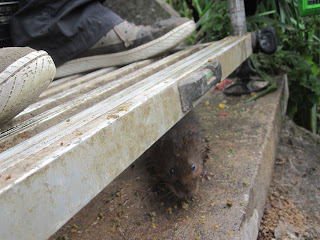 I started to hear a munching noise close by me and looking down I saw a water vole right under my feet.  A news article on the TV had mentioned these creatures were endangered so I dropped some corn down for it and it happily sat there munching away... I also grabbed a quick picture of it.

Time to prime the margin's with 4 large balls of groundbait and some corn trying to imitate and angler going home.  I drop the bomb and 8mm pellet over it and slacken off the reel clutch as bites in this area are pretty violent!

I managed to take 4 fish from the margins but none of the fish were the margin monsters we all hope for...  The all-out was called and that was day 1 over.

The Result
50lb and second last in the section.  A poor start from me and I was disappointed in myself.  Pete Bailey took the section win and overall the Monkees beat the Shandees.

Overall result for the day with 5 points at stake:

Conclusion
A bad result for me personally but the Monkees still won the section and the all important point.  I did however miss a vital area to try, the 5 metre line... this line had produced well for some on the lake including shogun who banked 166lb, most from this line... This was also Shogun's best match weight!  Well done mate!