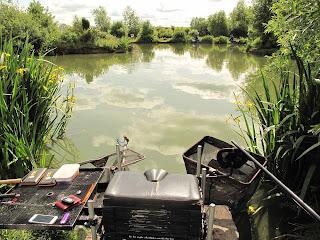 Day 1 of the festival, it was a late night after arrival at Lindholme Lakes.  Almost a full bottle of rum gone in the lodge and some very sore heads.  Colin is missing this year and it shows as there is no-one to look after his mate Tony.  Tony was looking very sorry for himself.at the draw.  Come back Col, all is forgiven!

The Draw
Two discs stuck together coming out of the bag, breaking them apart, peg 46 on Bonsai.

Set-Up
No edge line on Peg 46, but I had an island to go at and some open water. The method rod came out and was clipped up to the right hand edge of the island. Pole lines were at 5 metres and 13 metres full depth and shallow.

All-In
Kinder potting in some pellets on the 5 metre line to see if I could grab an early mug fish as there was plenty of swirling there while setting up. At 15 minutes it was clear that I was going to be able to mug one so I switched to the method feeder. The rod tip soon ripped round and a small angry F1 was in the net. After 45 minutes I’d managed five F1’s and one skimmer in the net.

The bites weren’t coming on a regular pattern and there were plenty of fish swirling in the area so I started to ping 4mm pellets on the 13 metre line to switch to the shallow rig.

30 minutes at 13metres fishing shallow and the net result was two fish.  Trying the same line at full depth, nothing at all.

I spent the next couple of hours trying all the lines, but I was struggling, in fact most people where struggling that I could see.

The last two hours were the best for my match.  I'd noticed the lads over the other side of the lake where catching on there 5 metre lines.  So I potted in some corn and a ball of micro pellets to try and get the fish on the bottom, using corn as hookbait and I managed to bag some nice carp on the short line which gave me most of my days weight.

Gary called the all-out and that was day 1 over, well the fishing part anyway!

Conclusion
The lake fished hard in most areas.  I was surprised with my result.  Tex managed to land a 13lb common carp, so he has the biggest fish of the week so far.  I'm now 15th in the league table, just need to grab a section win.  Tomorrow we are heading to Willows and Laurels!