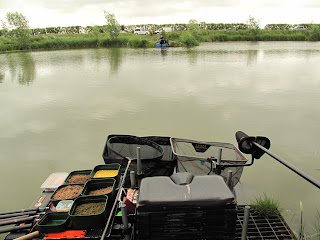 Day 3 after a night in the curry house with the lads, luckily I offered to drive so had a very clear head this morning, others didn't fair so well today.  Again we would be drawing pegs from both Willows and Laurels, so I could be on the same peg if my unlucky drawing hand pulled it out again.

The weather was definitely better, with some wind, causing ripple and it was overcast.

The Draw
Peg 52 Willows would be the home for the day.  A peg I've never fished before, so I was looking forward to the challenge.

Set-up
Pretty much open water ahead, with stick-ups to my right which ruled out the margin line. Luckily the left hand margin had been trimmed and was looking tempting. Fish were crashing about spawning to my far left so I set up a method rod to try and get over to them.

Pole lines were:
Bait for the day was a before, fishery pellets and corn.

All in
Kindering in a ball of micro pellets on the top 2 and 4 line and going straight over with a 6mm expander the float dipped and the first fish was on. Back over the line and the float was wafting about, showing that the fish were coming shallow. I foul hooked a fish so changed to the shallow rig on the same line.

After an hour, pinging 4mm pellets and dripping in micros I had caught about 10 F1’s on the shallow line until it died. I could see some activity in the stick-ups so decided to drop the method feeder in there. The tip wrapped round, in fact half the rod wrapped round and a fish buried itself in the stick ups.

Next thing the method feeder came back and the 0.22 hooklength broken. Two more attempts in the stick ups also broke more hooklengths. Fourth attempt I finally pulled a fish out and it was a small F1. I decided that line wasn’t for me today…

So, the margin line on the left was primed with some groundbait and a pot of corn. Going straight on it, the elastic ripped out and a very angry barbel. The margin line was alive. I took another four fish out of it and then foul hooked a fish.

Repotting some corn back over the line and another four fish in quick succession. Next fish snagged me up and as I was fishing with 0.2 mainline and black hydro I took the pulla bung out and bottomed the elastic, still no rig back. Putting a slight bend on the top kit it exploded into three pieces… oops.

Re-rigging I soon got back into the swing of things and catching some more fish. The last hour I primed the top 2 and 2 line with a cup of corn, but I was still catching in the margins.
A fish on the all-out and time to see what the result was.

Result
47lb 2oz for section second. My estimate of 40lb was well out and Gary had got within 10oz of his weight so I had to pay him a pound.

Conclusion
Fished for 3 hours in the margin which I’ve never experienced before. The fish just kept on coming. No lumps but enough to keep me busy for the match. The weather was overcast today and all the weights on Willows were better than the previous day. An enjoyable day, now for the mid week celebrations which will of course, end up with a hangover in the morning!