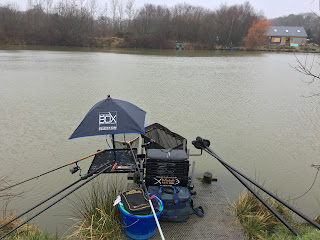 After a bad start to the festival I was looking forward to fishing Willow Lake behind the new tackle shop.  Willow had been fishing well so far this week so was expecting a good day despite the weather.

The Draw
Peg 8 on Willow was my lot for the day.  It was the middle of the far bank.  Neighbours would be the Scottish C@£$, Col K and Shedders.

Set-Up
Pole lines at 6 metres with a "99" double bulk rig and a waggler for fishing to the sunken island.

All-In
The weather lady had predicted the rain would stop at 12pm which for once, was right and the whistle for the all-in also stopped the rain!

After the previous day I opted for a negative approach on feeding and had selected three areas on the 6 metre line, cupping in nuggets of groundbait over each line.

The plan was a per Animals cracking victory yesterday on Willow and to take a couple of fish from each swim, before topping up and moving to the next.  Best laid plans and all...

Thirty minutes in and the 6 metre line wasn't producing so I had a quick look on the waggler.  Bite straight away and a fish!

A few more fish came very quickly.  I was enjoying fishing the waggler and hardly noticed the time go by.  I had a quiet spell, so decided to fish a bit further out in shallower water.  It worked and the fish kept on coming.

Stamp of the fish were still relatively small, but it was an enjoyable day with single live red maggot working the best.

The Result
6lb 10oz for last in section!  My festival was turning into a disaster on the fishing front and I was rock bottom overall!

Conclusion
Regardless of the result I had a cracking day on the waggler.  Col K's fish were of a better stamp and thus I lost another pound to him.