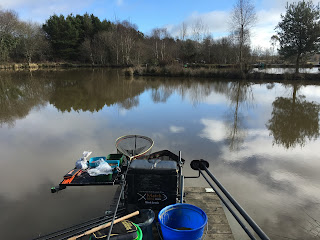 Needless to say I was currently in the last seeding group and Col K had picked Woodpecker for us.

The Draw
Peg 12 on Woodpecker, a great draw.  Herbie came over and explained how I needed to fish todays match for a good result.

The key to Woodpecker is the fact it is was originally made up of 8 smaller lakes.  Target fishing the deeper areas where the lakes used to be joined.

All-In
A beautiful day lay ahead of us.  Herbie's advice was to put in two balls of groundbait with no loose offerings in on the Island line and one ball on the 2 o'clock line and fish the feeder for the first hour to let the lines settle.

So I followed those instructions and went out on the feeder for the first hour which resulted in one skimmer and one large mirror tench carp.

All the time on the feeder I could see signs of fish on my island line.  Time to give it a go.  Herbie had mentioned that I should kinder pot a couple of 4mm expanders in for the larger skimmers, so I did and decided to go straight onto 4mm expanders as hookbait.

Float dips, small skimmer... I was in touch with the fish for the next hour, although nothing large but I was happy putting fish in the net.

Mid match my island line died off, so rather than putting another section on I decided to feed a small ball of grounbait, rest the swim and move to my other lines.

Another hour past with the feeder producing some small fish, but nothing on my 2 o'clock pole line.

Back to the island line where I stayed for the rest of the match.  I really had to search around the swim for bites and fish.  It was very frustrating as you could see that there were fish in the area but bites were at a premium.

The final hour I managed to net some bigger skimmers, not the big slabs that we are used to but more than welcome.  The all-out sounded, was I off the bottom of the leaderboard?

The Result
4lb 10oz for joint 2nd with Positive Paul.  Herbie won the section and my result was enough to lift me from the bottom of the overall table, saving at least some pride.

Conclusion
A lovely day mixed with trying to get back in touch with the fish.  Should I have left the island line longer to cook?  I don;t think so, as I wasn't getting anything of note from the other lines.  I managed to get a Jock pound back too and as a result was lifted from the bottom of the overall leaderboard!!! Phew!

Congratulations for Carpy Marty for winning the festival, piping Hathers to the title on weigh!  Well fished matey!

A massive thanks must go to Herbie, who is our Leader!  Thanks Herbie for everything and all the effort you put into this event!  Thanks also to Ken who was Herbie's Executive Assistant the whole week.  Everything ran very smoothly indeed.

A huge congratulations to Jo and Paul on how the fishery is shaping up.  They have a vision and are working towards it.  Rome wasn't built in a day guys, what you have achieved so far it fantastic. They are also a really lovely couple, what's not to like!