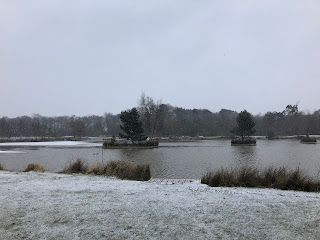 The third day of the festival and the beast from the east was closing in on us fast.  Herbie had taken a measured decision that today would be our final day as the weather forecast for tomorrow could see us snowed in at Stafford Moor.  Now we had plenty of beer and food to last but it was definitely the right decision given the conditions.  After all we still had curry night to enjoy too.

Today I'd be on Tanners and was really hoping for a draw on the lawns, not too far from the comfort of the lodge.

Again the lakes had frozen lids on them so it was going to be a tough one.

The Draw
Peg 17 on Tanner would be my home for the day.  This is directly opposite the lodge, not quite next to it as I'd hoped.  I'd have Rob A and Silvers for company.

Pete Bailey had drawn 18 and once he saw the lake he quite rightly said he was off home!

Set-up
The wind was really gusting so today was most definitely a rod only day.  The bonus of the wind was that it would shift the ice as the day progress, small mercies and all.

I clipped up the feeder to fish at 13 metres (initially). 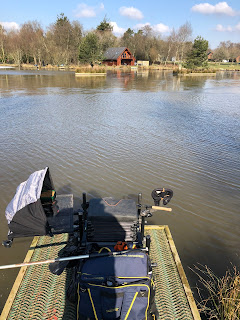 Well the all in was called and I lasted an hour before a text came through from Shedders saying that I looked really cold and that he was enjoying a cuppa and some toast in the lodge, so it would be rude not to join him.

I walked back to the lodge safe in the knowledge that the fish were only really caught in the last couple of hours of the match, so I stayed in the lodge for quite some time.  Other anglers around the lake hadn't even tackled up yet, they were waiting for the ice to clear to see if they could get some fishing in at all (76TB and JWB).

Going into the final couple of hours, the ice had cleared for 76TB and JWB enabling them to fish.  Well one angler actually fished with someone elses rod and reel and JWB even lent his some hook lengths...

Another long story sideways.  The ice had cleared my peg so I decided to put a heavier feeder on and try to reach the islands.  No joy at all.  76TB and JWB were clearly catching at a regular rate and Dave behind me was also getting into the fish.

The birds around Stafford Moor certainly had a feed that day with all my bait going on the bank for them to enjoy.

Result
Pass me the cheque book and pen Terry... it was a blank which really harmed my knock out and placing for the day and the final.  I also had to give Chris a quid as he managed to win the lake with 6lb 8oz using borrowed gear and only fishing in the last 90 minutes!

Festival Result
A massive congratulations to Dave Ball, aka Captain for winning the festival.  Great result to a worthy winner!

My festival result was 18th which I was very happy with including coming running up in the super numpty group!

Conclusion
Should I have cast around looking for fish or followed Silvers and cast in the same spot all day.  Well the answer was easy, Silvers had caught, the fish had turned up and he quite rightly capitalised on them.  Well fished Dave!