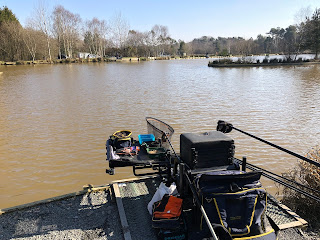 That time of year is on us once again, time to drive down to Devon and the brilliant Stafford Moor fishery to see Paul and Jo and witness the work they've untaken since last years trip.  We would not be disappointed.

An early morning start saw me getting to the fishery at 9am to be welcomed with a hug, from Jo, not Paul and a cup of coffee.  Behind the tackle shop the new lake is taking shape, the roads around the fishery vastly improved together with plenty of great parking at the lodges.  Paul and Jo have also built an area with electrical hook ups for caravan and motorhome owners.  Great job guys!

I was first at the lodge so plenty of time to unpack both the fishing gear, clean the worms, prepare some ground bait and get the food and beer supplies ready.

Today, Herbie had organised a knock up match for 3 hours which allows you to get your gear sorted for the week and also to figure out where it all is after the winter storage.

The Draw
Taners and Woodpecker pegs were in the bag.  Now as most will know I always draw on Woodpecker and have since been banned from drawing for a lake until further notice as my drawing hand is pretty crap.  Well today would be no different, Peg 9 on Woodpecker which is the one in the far right corner as you approach the lake.  On the plus side a peg I've fished a couple of times before however today the wind would be right in my face all day.

I'd also have Ken as the only neighbour on this bank for the day.

Set-up
With the wind a long pole line was going to be tough and plumbing up I found around 5 foot of depth at 13 metres both straight ahead and towards the point of the island.

Next pole line was on the top 2 plus 2 towards the point of the island and also a stump on the left hand margin.

Finally I broke out my small 6'6" Tricast pond wand in case the wind got worse.  I clipped this up on the 13 metre line by shipping the pole out with the feeder and bail arm open, then clipping up the reel.

Bait for the day, some casters, dead reds, chopped worms and groundbait.

All-In
To say it was cold sitting in the peg was definitely an understatement, it was baltic!  I wanted to find out if the fish would respond to worms or not so on the long pole lines I fed the left hand one with 2 balls of ground bait with a small amount of casters and dead reds.  The island pole line with a single ball of chopped worm.

The top two lines were fed with a half pot of casters in each.

To cut a long story sideways, after a couple of hours with my hands like blocks of ice and I had a couple of small roach to show for my efforts and the winds had made holding the pole pretty tough even with a long line to the pole float.

More and more of the lads were turning up at the fishery and having a walk around so the banter really started.  My short lines had not produced any roach or skimmers so I decided that the tip rod was the best way to proceed.

Tiny cage feeder and double dead red maggots I started to nick the odd roach, then Shedders and Jaap came over.  Shedders quite rightly said to me, ignore the roach bites and wait for a proper skimmer bite.  So I did exactly what he said and 30 minutes later two lovely slabs graced the net which kind of got me out of jail with my weight!

All out was called on our short match, over to the weigh scales for the results.

Result
6lb 11oz for dead last on the lake.

Conclusion
The worm line had produced the better fish that was for sure.  The wind made pole presentation very difficult indeed, should I have switched to the feeder earlier?  Well I would put that plan in action the next day when I would again draw on Woodpecker although in a different area still with the cold easterly wind.
Match Fishing Scene (MFS) Matches Stafford Moor