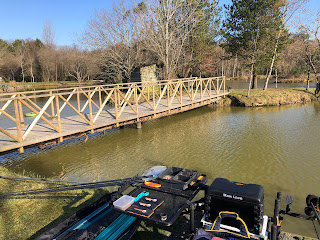 The lake rotation for my section meant that we would be on Pines today. Again the MFS massive gathered in the tackle shop ready for the draw.

The Draw
Peg 5, the bridge peg for me today. Jamie Howarth won the lake from here yesterday fishing just off the bridge, so no pressure at all ;-)

Neighbours for the day, Big Nige on the left side of the bridge and Pete Merce on my right. 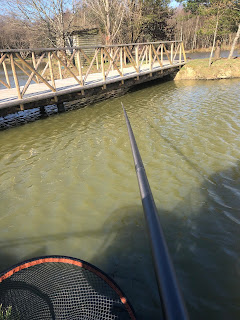 The bridge lines where deep at almost a top two and with the wind blowing quite strongly I opted for a 1 gram rig. Bait was Pellets, caster, worm and maggots.

All-In
Today I decided that negative feeding would be the way forward so kicked off the far bank swim with a small nugget of chopped worm and the bridge swim a small amount of micro pellet starting with a dead red on the hook.

The first hour I put a few fish in the net, mainly small skimmers however nothing of note. I had topped up a couple of times with more micros and the next fish to grace the net was a beautiful large multi coloured tench. The swim then died for the next hour so I found myself fishing around the stanchion and also going across to the far bank.

A small robinson came from the chopped worm swim however the wind was making presentation very difficult.

Changing the hook bait to a soft pellet for the bridge swim however it wasn’t right, the wind was pushing the float through, so another change to banded pellet despite the float moving through the swim I started to pick up the odd small skimmer.

I had a break from the fishing for around 40 minutes to take a call so I topped my swims up and got off the box. 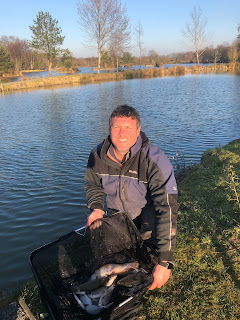 The wind never subsided until the all out of course! I was still picking up fish however no great runs and with only one bonus fish didn’t know how I finished in the section.

Result
8lb 10oz for section 5th, pipping Big Nige on our side bet however losing another pound and a pint to 76 Trombones…


Conclusion
Tough day with the weather. Bright sunshine a the wind ripping down my peg. Pete Merce and Big Ben on pegs 8 and 9 had pretty much still water in front of them, so my presentation was compromised.

I did look at starting a line in front of me however the shadow on the water was of me on my box so decided not to fish it. The margin line to the bridge didn’t produce anything either.

While it didn’t make sense fishing a banded pellet that was moving through the swim that was the line that picked up the fish. Red maggot or worm head failed me this time round.
Match Fishing Scene (MFS) Matches Stafford Moor