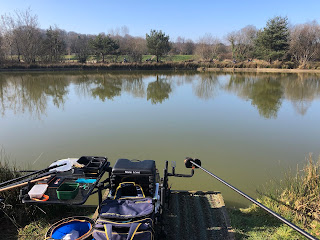 Now I’m not doing very well in the competition, two days in and I’m most definitely earning my division 4 ranking! Today I’d be on the lake that is my nemesis, Woodpecker and I was hoping for a good draw.

The Draw
So I decided to take the final peg in the bag today and I ended up with Woodpecker Peg 12 with Big Ben and Richie Farrow for neighbours. The masked bandit Rob A a little further up the way.

Set-up
The weather was bright sunshine, very little wind and flat calm on the water so perfect for the waggler and pole.

Waggler would be fished between 16 and 20 metres, pole lines were: + 8 metre pole lines – groundbait on the left line and pellet on the right line + Margin line on the left – slop worm and groundbait

All-in
After chatting with Chris Martin who mentioned that he had some proper bream close in towards the end of yesterdays match I decided to drop three balls of groundbait on the left hand line. The right pole line just a small nugget of micro pellets, steady away on this line. 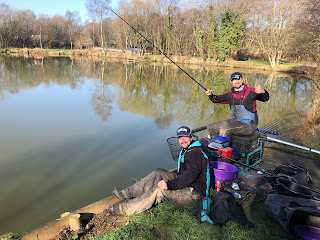 Worm slop in the margin was served up on my left margin up towards Richard and Rob. I felt the right margin was too close to Ben and I had a tree obstructing getting close in.

The first two hours was spent on the waggler, pinging casters on the left pole line and catapulting casters to the waggler line. It was a beautiful day and reading the float was a joy, especially with the Drennan Vizi Wag 2’s and silvers, mainly roach, were coming to the net.

A top up on both the groundbait and pellet lines each hour and as the waggler line died back I dropped in on the pellet line, 4mm banded pellets to take some more silvers however it was clear that things had slowed.

Checking the margin gave me a very positive bite which resulted in a quality skimmer followed up by two large carp, one which I landed and the other which smashed up the rig. Grabbing a spare rig and setting it up I could see the groundbait line start to come alive with bubbles.

Dropping in on the left hand line with triple dead red maggots I managed to take 4 large skimmers before they backed off. Adding a section on the pole I took one more fish and then lost touch with the fish so I checked the pellet line to see if they had moved over but nothing except a small robinson appeared. 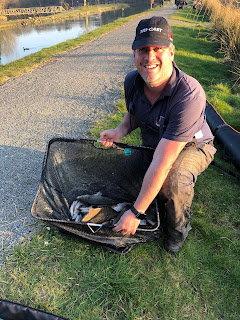 I topped up the margin line with my worm slop and yep, you guessed it, more carp.

Ended the match on the groundbait line as the sun made the waggler tough to see and took some more roach and small Robinsons.

Result
15lb 2oz, 4th in section, just out of the money and 6oz behind 3rd in section!

Conclusion
While I had two great hours on the waggler line, should I have fished a long pole? The set-up of this bank on Woodpecker meant double shipping the pole, which to be honest put me off however could I have had more out of the peg? I only needed 7oz at the end of the day for a place!