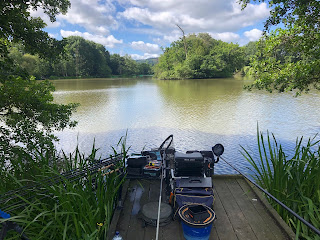 Back to the Lake of Breams that is Old Bury Hill, the main lake and a match that Hathers had organised for the OBH Lovers and serving as a practise for the Wednesday series that he runs.

Bury Hill is a beautiful fishery and the weather was being very kind also.

I'd popped down a few days earlier when Hathers was having a practise for the practise session and learnt quite a lot from him, Mickey D and Ricky Baxter.

The Draw
The draw finally got under way after Hathers realised that Mickey D wasn't fishing today.  Fourteen of us spread across pegs 1-20 with the higher number pegs the ones people wanted.  My draw for today, unlucky for some, peg 13.

Now I've been to peg 13 last time I fished in August last year, you can find that article here...

Neighbour for the day was Silvers.

Set-up
I have the end of the big island in front of me which of course is a natural draw for fish so I set up two 13 foot rods as follows, both clipped up at 65, 70 and 75 metres:

Pole line was straight ahead at 14 metres, setting up two rigs, one 0.4g rig and one 0.6g, double bulk rig.

All-In
Two balls of groundbait with some micro pellets went on the pole line and straight onto the t-bag at the first clip at 65 metres towards the island with an 8mm pellet.

This would be a timed cast of 15 minutes to assess what to do next.  13 minutes later the tip rattled and round it went with the first fish.  Five casts later and five fish in the net matching Dave next door who was also on the tip but using a method feeder with a dumbbell.

The fish were coming either at 5 minutes or 13 minutes, so the next two casts at 15 minutes each and no bites told me they had probably backed off, so I switched to the method feeder on the same line at 70 metres however nothing.  The fish had gone for the time being.

Onto the pole line and I must admit I was struggling for the next half an hour, the wind had got up making holding the pole a big harder than normal.  Some adjustment on the shotting and finally I connected with a bream.

The next couple of hours it was a really lovely session with bream coming to the net on a very regular basis however Dave next door to me was catching at a better rate than me.

One of the bites I thought I'd hooked a carp as it took a lot of elastic.  Finally getting the fish back and near the margin I saw it roll and it looked like a tench however it was clear foul hooked as the rig soon came back to me and the fish was gone...

I was topping up the pole line was a small ball of groundbait every three fish, resting it for 15 minutes while I would cast the t-bag or method out.

Into the final 90 minutes and Silvers next to me grabbed another net.  I knew he was ahead but didn't think it would be enough to justify another net...

Some more clonking bream on the pole line and with forty minutes left, the swim just died...

So with the clock ticking it was back out onto the t-bag however no more fish would grace the net before the all-out was called.

Conclusion
With the wind on the pole line, fishing the soft pellet wasn't the way to go and the change to three dead red maggots allowed me a couple more bites at the bites before finally connecting with the fish.

I was happy with the first hour of the match however the final forty minutes it was if my swim had just switched off, everywhere.

Congratulations to Silvers whose final 90 minute 3rd net went for around 26lb.  I was ounced by Hathers so had to surrender a pound to him and I also had to fork out a quid to Big Si who came third overall.

There was a rumour that Hoggy had over a 100lb of fish however the weigh scales showed differently.  Interestingly Keith had caught on sweetcorn over micro pellets, rotating three lines.

A great day with some great lads!  Good luck in the Wednesday series boys!