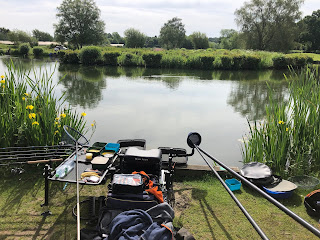 Another match with Godalming Angling Society at another one of their waters in the Marsh Farm Complex.

Today I'm fishing Harris Lake, lake which is renowned for its large tench and crucian carp.

Peg 27 came out of the bag for me... one of the longest walks from the car park however as I'm on a fitness regime at the moment something to get the heart pounding.

Neighbours to my right, Henry and Paul.

Set-up
The weather was bright and sunny and very little ripple on the water however I decided to target the far bank with a feeder / bomb approach rather than the method.

Pole Lines to target the lily pads on my right, 13 metres into the white water and a short top 3 plus 2 line to my left.

Bait was mostly a natural selection with some expanders thrown in just incase.  I also had some sweetcorn that I had liquidised which would be to generate a cloud with plenty of small particles on the lake bed near the lilies. 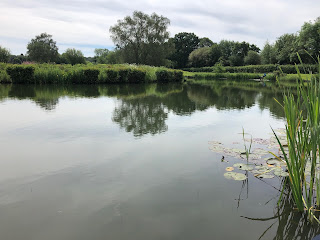 The lake was extremely clear, so as the all in was called I wanted to test the corn slop before I piled it in and dropped some between my keepnets.  It generated the cloud I wanted and also left very small particles on the lake bed... perfect.

Kicking off the lines with liquidised corn to the lilies, a small golf ball of ground bait on the long pole line I started proceedings on the feeder short of the island.

Henry, next door, had warned me that we was going to ball his swim and on the all in put 5 large Jaffa's on his short line.  He hooked a fish within 10 minutes which unfortunately came off.  He then hooked three other fish, all lost with the final fish being bullied a little too much as Henry admitted himself.

In all that time I had cast out every 5 minutes without any movement on the tip.

Hour two and I was on the lily line however, nothing at all was happening.  I had potted the corn slop in heavily and from a height to create some noise in a similar manner to Henry balling it, but nothing.

Hour three went by with no bites.  Henry's bites had stopped, Paul wasn't catching and the other lads on our bank weren't catching either.

Hour four I decided to use my short line and ball it too.  Five decent size balls of groundbait went in on the short line and I went straight over the line.  The swim started to fizz so I dropped in the double caster hook bait and waited...

A slight indication, then straight under and a large crucian came to the net.

Going into the last hour, still nothing, it was proving to be a tough match and we heard that the other end they were sacking up.  I decided to re-ball the short line.

Changing bait to worm, nothing and then to a white and red maggot, the float dipped and an even better crucian was in the net (probably my PB however we never weighed it).

With 5 minutes remaining and other bite and a large female tench graced the net and the all out hooter went.

The lads around me hadn't caught anything... Could I be in the running for a section win? 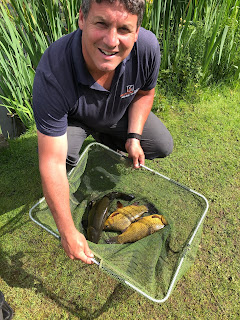 The water fished very hard however the winner was Frank on Peg 46 fishing pole and pellets to win with a fantastic 62lb of tench!  With Charlie on Peg 40 coming second fishing the pellet feeder to the island with 44lb.

Conclusion
Harris is more of a big fish water and with that comes a definite "set the trap and wait" mentality.

I was remaining on my lines a lot longer than I normally would have and even after the first hour expected at least a line bite on the feeder line.

With many blanks today, the balling in, creating noise and seeing that the fish were actively feeding by the bubbles gave me confidence to stay on the short line.

Three beautiful fish however I had to work very hard for them.