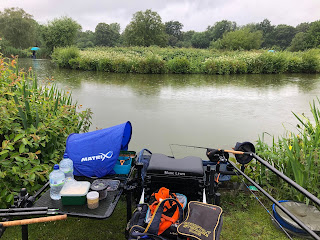 Sunday match this week I opted to head back to Richardson Lake with Godalming Angling Society (GAS) who were sharing the lake with the Farnham Match Group (FMG).

A quick call to the match secretary and I was in.  Turns out that 36 of us would be fishing.

The Draw
Drawing was split between GAS and FMG and ordered by the time you booked on.  I was second last on our list however Peg 10 came out for me.

Not a bad draw and one peg from the area that everyone was fancying!

Set-up
Waggler and Bomb rod straight out of the bag to target the far bank which is just beyond pole range.

All-In
The decision from the off was to take the negative approach and with that I potted in two balls of ground bait was a smattering of casters on the long pole line.  The rain was just settling in for the day too...

I decided to try the wagglers first off on the right hand side of my swim so as not to disturb the pole line.  Fifth chuck and the float shoots under and fish on.... then fish off... it certainly felt like a good fish, so I tried to reconnect with them for a further 15 minutes before changing tact and dropping the bomb and double caster over the line.  End result, nothing at all...

So the first hour had past and nothing in the net.  It was tough to assess what other anglers around me were and were not catching as I couldn't see them so decided to drop on the pole line.

Finally a bite and a fish... a cracking crucian carp was in the net.  Continuing on this line I put a further three large bream in the net, landing the final fish, the hooklength broke so I quickly changed it over to try and plunder the visit from the larger bream however no more bites happened.

I topped the line up with two more balls of groundbait and fished the margin's where I'd been drip feeding casters in all day.

The margin's produced some smaller skimmers and crucian carp however nothing of note.

The long pole line didn't result in any other larger fish and the later half of the match was quite dull, just like the weather.  The weather was also making holding a long pole difficult so I dropped the waggler over the line however nothing else was to come out for me.

I could see Andy Rodgers catching well on the waggler from peg 38, it was about the only action I could see!

Result
13lb 5oz for I think second in the section behind Dave Hoffman with 17lb 8oz from Peg 8. 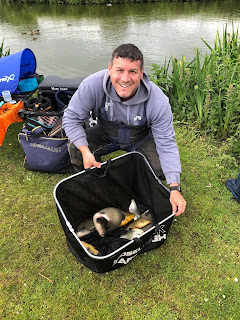 Conclusion
Great to see Steve back from the land down under and getting an excellent 3rd place finish, well done mate.

Weights from our section were low and in fact many anglers simply DNW...  What could I have tried differently?  Well the waggler, maybe banded 6mm pellets on the hook and feeding them too instead of maggot to ensure I attracted better fish?  I'll certainly give that a try next time I'm on Richardson Lake.

I did think about having a chopped worm margin line and like most anglers, I thought about it, but didn't action it... next time, as advised from one of my mates, you think it, do it!