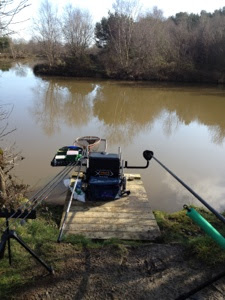 After the madness of the first night with the Matchfishing Scene lads, well 28 of them, waking up the head was a little thick to say the least!

Herbie had organised a knock up match which would count towards the MFS Champion League.  The group eventually congregated at the tackle shop for a 9am draw.
I drew peg 3 on Woodpecker, Andy, fishery owner said it was a roach peg, he wasn’t going to be wrong!
Peg 3 is all on it’s own at the top end of Woodpecker, in a bay of it’s own.  Plenty of carp where topping, but that’s not the quarry today... shame, because this peg has plenty of carp holding areas.
The Set-up
No rods were broken out, it was going to be pole all day long.
With plenty of time to set-up I was ready 30 minutes before the all-in, so I plumbed around my peg.
The All-In 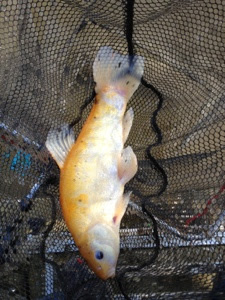 I cupped in 4 balls of Sensas 3000 Bream groundbait, laced with casters and dead krilled maggots.  I would leave this line for the first 2 hours, topping it up every 30 minutes with a ball of groundbait to allow the fish to settle and become more confident.  Bait for this line was maggot, caster and 4mm expander pellet.
I started on the inside line and threw in 6-8 casters each put in.  Bait for the inside line would be predominantly maggot, caster and worm head.
The first put in on the inside line produce a quick roach.  I was warned it was a roach peg.  After the first hour I had 30 fish on the counter, yes, you guessed it all roach, ranging from eye’s with fin’s up to 7oz quality fish.
The second hour was to throw up some surprises.  The float buried and pink hydroelastic streamed out, had the carp turned up to spoil the party?  The fish showed itself and it was a beautiful golden tench, which happens to be my first ever! 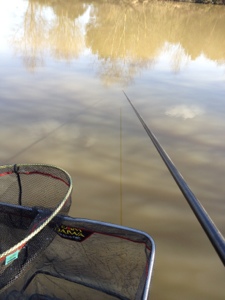 More roach followed, no surprise, but no skimmers yet.  The next fish was to test the light rig.  As with the golden tench, the elastic streamed out, these was most definitely a carp, surprisingly the fish came to the net very quick, it just fit into the landing net and turned out to be an 8lb mirror carp.
Hour two came up and I went onto the long line to see what had settled over the feed.  All the bites on the long line were lift bites.  After watching a video on youtube about fishing for silvers at Stafford Moor, I emulated the double number 8 drop shot.
The long line produced another golden tench, this one was pure white with a gold stripe across it’s back, a cruician carp and one skimmer.  The long line wasn’t working, even after giving it an hour.
I went back to the short line for the rest of the match and ended up with 103 fish on the fish counter and weighted in 19lb 4oz.

The Result
19lb 4oz, 9th out of 14 anglers, 1 MFS Champs League point
Conclusion
Despite not getting a blinding weight, I was kept busy all day long, it was a great days fishing.  Stafford Moor has impressed.  The setting is fantastic, the wildlife was all around.  I had a robin and a blue tit for company and they appreciated the maggots I fed them.  They were that cheeky they would land on the cupping kit waiting for the next couple fo maggots to be fed.
The Lodge of Plenty Dinner Menu
As a temporary member of the lodge of plenty, on probation as Milo likes to say, Colin was busy in the kitchen, as we sat down a full roast dinner was presented to us.  Roast Beef, Yorkshire Pudding, Roast spuds and all the trimmings... there was no left overs for Daddy May that night!