Stafford Moor has 22 acres of lakes set in the Devon countryside with 30 of Match Fishing Scene's "characters" all staying at the lodges this is going to be a memorable week!

Marukyu had kindly sponsored the event by sending three cases of their EFG130 groundbait, including a Marukyu cap for all anglers.  Other sponsors of the event include SconeZone floats and Haines Angling. 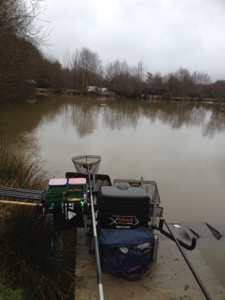 First day of the MFS Silvers Festival at Stafford Moor.  Again we all gathered at the tackle shop for 9am.

The teams had been drawn the previous night, I was with Rolly, Jim McD and Animal.  The teams weight on the day would be for the team event and your own weight for section and/or lake win.
I drew peg 16 on Woodpecker, this peg won the lake yesterday with 52lb of silvers so I was hopeful of a good day on the bank... how wrong would I be!
Peg 16 is a corner peg.  After speaking to Pete Merce, who won yesterday he told me he went 14.5 metres along the bank, a short line and 16 metres aiming at the point of the island.
The Set-up
All lines were set up with a Sconezone Jadz, 0.10 Gamma Green size 16.  The worm and 16 metre line where the same depth so one rig would cover both.
I decided to break out a small feeder rod to go beyond the 16 metre line in case the fish backed off after the battering they had yesterday.
Again, I had around 20 minutes before the all in, so I rechecked the depths, got the floats set up to a 3mm pimple and generally got comfortable.
The All-In
I cupped in 4 balls of Sensas 3000 Bream groundbait, laced with casters and dead krilled maggots on the 14.5 metre margin line.  As with yesterday, I would leave this line for the first 2 hours, to allow the fish to settle and become more confident.  Bait for this line was dead red maggot and 4mm expander pellet.
I also cupped in 2 balls of groundbait on the 16 metre line, so my starting line would be the shorter worm line.
The worm line I was kinder potting in worm and caster each put in, after an hour the float had not even moved.  Meantime James on peg 16 had around 5 skimmers.
I decided to try the 16 metre line with a dead red maggot, eventually the float lifted and the first skimmer was in the net.  After the second hour past I had 6 fish in the net, not a blinding start at all!
Moving to the margin line which had settled for a few hours I was expectated of some better fish, this was not to be the case.  A couple of quick skimmers and then a lovely cruician carp of just over a pound.
I was struggling to put together a run of fish which saw me rotating my lines taking a couple of fish from one line after 15 minutes of struggling, moving to the next line, taking a fish, moving to the long line.  It was proving frustrating to say the least.
Fancying a cup of tea, I tried the feeder which produced a skimmer and nothing more.
The closing hour of the match, the margin line was producing more fish, although it wasn’t quick, then of course the carp moved in and I hooked a lovely common carp of around 8lb.  It lead me a merry dance for around 10 minutes before straighting the gamma green hook.
My match was going very well so I went back to the feeder for the last 30 minutes and ended up with a lowly 6lb 13oz.  Taking a battering of James on peg 16.
The Result
Last in section and 25th overall.

Link to Matchfishing Scene Day 1 Results
The Team Result
A pretty poor day for team A we ended up last...
Conclusion
Woodpecker fished hard today.  At least I didn’t come last.  The overnight weather was a light drizzle and the it was an overcast day during the match, which would appear to be perfect bream weather.  Chatting to the other lads because the lake had taken a battering the day before, maybe the fish had backed off.
The T-Shirt
Colin (BNF) beat Andy Jameson of the next peg by one ounce, 6lb 9oz to 6lb 8oz... didn’t really deserve the t-shirt, but rules is rules where the “Battered by BNF” T-shirt comes into play. 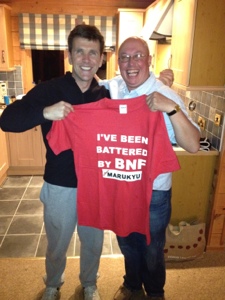 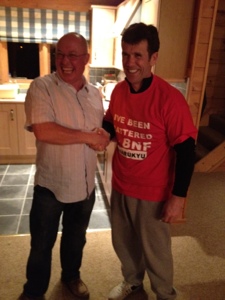 The Lodge of Plenty Dinner Menu
Colin cooked up a lovely lamb curry together with a variety of Naan breads, washed down by plenty of beer and the entertainment was provided by Gary (Milo) and RedArmy... it was one of those nights where your sides are splitting and your jaw is aching from laughing.  Needless to say there would be a fair few hangovers in the morning!
Match Fishing Scene (MFS) Matches Stafford Moor
Location: Stafford Moor Fishery