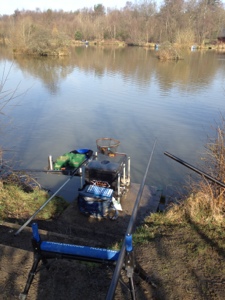 Second day of the MFS Silvers Festival at Stafford Moor.  Again we all gathered at the tackle shop for 9am.
Team A, needed a result today as we were languishing in last position!
I drew peg 30 on Tanners at the end of the section on the far bank.  The wrong end of that bank according to the locals.
The Set-up
After plumbing up the 13 & 6 metre line I had 6 inches difference in depth, so marked the top kit with both depths and would use the same rig, adjusting the depth when changing swims.
The chopped worm and bush swim were the same depth, so one rig for those two.
The All-In
Andy G had tipped me off how to fish these pegs, so following his advice, I cupped in one ball of groundbait on both the 13 metre and 6 metre and cupped in some chopped worm on that line.
I went straight onto the long line with single dead red maggot.  First bite took a couple of seconds, the float buried and the first fish was one, unfortunately it was a large carp of around 6lb which took 15 minutes to land.  I put it in the second keepnet and topped up the 13 metre line with another ball of groundbait. 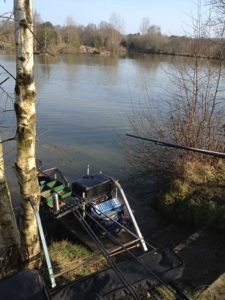 It took 5 minutes before the first skimmer was the in the net.  The 13 metre line was proving to be quite consistent sport.  As the bites tailed off or I would get a string of roach I would top up the swim with another ball of groundbait.
Giving the long line a break after topping it off I went to the 6 metre line and took 3-4 fish out, throwing in nuggets of groundbait after each fish before moving back to the longer line where the fish were of a better stamp.
The chopped worm line was topped up every 30 minutes and I rested this line for 2 hours, meantime always flicking out 6-8 casters on the bush line.
Progress in the match was steady away and at the 2 hour mark I went to have a look on the chopped worm, disaster, I hooked the bottom of the keepnet and pulled the rig and had to replace the hooklength.  When I did get a bait out back came a small perch and a skimmer, not the tench I was hoping for! 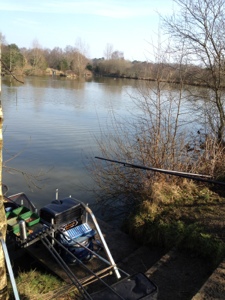 Checking the bush line, another small perch and roach.  No time to waste, back to the long line.
After 3 hours I had used a kilo of groundbait so I had to mix up a new batch.  Checking the chopped worm line, a nice skimmer came out, so I tried again which ended up we me playing another mirror carp of around 5lb for 15 mins.
In the last hour I cupped in a ball of groundbait at 12 metres and continued to fish at 13 metres.  There was plenty of activity and some bubbles, the fish were there and they were playing!  I decided to put on a piece of corn and the inventible happen and the elastic was again streaming out... luckily the hook straighted and no damage was done
For the rest of the match I rotated the 13 and 6 metre and had a really good day!
The Result
27lb 12oz and 3th in section, 8th overall and my first ever brown envelope with £25! Yeah! 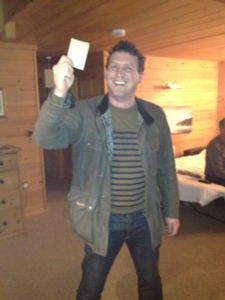 Link to Matchfishing Scene Day 2 Results
The Team Result
The second bit of great news was that my team, Team A managed 106lb which was good enough for the team win of the day!  My second brown envelope, this time containing £35!
Conclusion
Andy G’s advice was spot on.  I fed in accordance with the bites and the fish, when the roach came in, I fed more groundbait which brought the skimmers in.  The 6 metre line was fed every 20 minutes with a one handed ball of groundbait and it kept the action going for me all day long.
The T-Shirt
Colin had taken a battering of Gary on the next peg, so it was only appropriate he should be awarded a t-shirt of his own :-)
The Lodge of Plenty Dinner Menu
Grilled pork chops with roast potatoes, mushrooms and onions, yum.  In honour of my pick up Col gave me the largest pork chop which was greatly appreciated ;-) 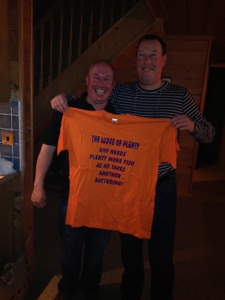 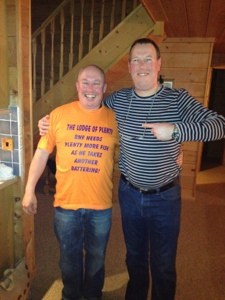 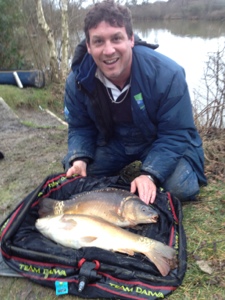