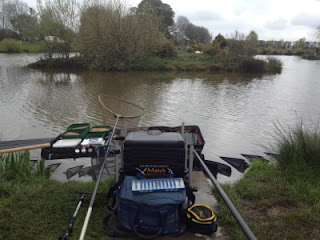 The majority of the Maggotdrowning crew had gathered at Lindolme Lakes on the Sunday where I discovered that the vast majority of anglers where from the North East.  I immediately felt at home until I met a lad called Chris Walker who misheard my name Lewy and started to call me Lee.  Of course I bit and now all the guys are calling me Lee much to everyone’s amusement.  The craic is brilliant and Chris is a very funny lad, although he did almost fall in today which would have been just reward for my new nickname! ;-)
The Sunday night we all ended up in the bar at Lindholme and myself, Tricky10 (Ricky), Col, Tony and Aaron (Neil Gratham's son) where there until the bitter end at 1:30am.  Needless to say the hangovers kicked in when waking up.
The Draw
Gary Street (Rambo) was well organised, there was no need for a disorderly queue at the drawbag as we would draw as our names where down on the list.  I pulled out peg 35 towards the corner of Bonsai.  There were 26 of us on the lake so the pegging was very generous allowing for a spare peg either side of every angler.
The Set-up
I had an island in front of me and also both points of the island, so I set up the following:
Pole
10 foot bomb rod with method feeder
The All-In
It was a relaxing set-up and I had about 20 minutes to spare.  The All-in was called at 11am (we would be fishing to 5pm) and I cupped in some dampened 4mm pellets on the 2 o’clock 10 metre pole line and some dampened micro pellets on the 10 o’clock line.  Both these lines would be topped up every 30 minutes until ready to fish.
First cast was to the island point on the left and disaster, the method feeder got caught amongst the branches of an over hanging tree and it was lost.  Setting up a new rig I went to the same place, but avoiding the tree and waiting for the first indication.  After 30 minutes no movement on the tip which would be the same in the next 30 minutes.
I was fishless after the first hour and decided to try the right hand side of the island.  It wasn’t long before the first F1 was in the net.
After 2 hours I had 3 fish and the guys around me were suffering the same fate.  The cloud were darkening and we would be in for a hellish day with regards to the weather!
I tried the 10 metre pole lines for 30 minutes and didn’t even get a bite, so I decided to ditch them.  It was now that the heavens opened and we were barraged by a hail storm for about 40 minutes.  It was now that the fish started to top everywhere on the lake, so I quickly grabbed my shallow rig.  Slapping the rig a few times on the surface a decent F1 was soon in the net.  I managed to get another 4 fish like this before the hail go so heavy the fish even went deep.
I fished the rest of the match on the method feeder and found that I had to cast close to the island to get a quicker bite.  I was also putting 4 to 6 pellets over the method feeder to make some noise and bring the fish to my bait which was working.
The all-out was called at 5pm and the lake had fished hard, some lads would be very disappointed, especially Cheesy (Rob Crowhurst) who got battered off the next peg by TexasPete (Peter Craig).
The Result
37lb 9oz, 3rd in section.  88lb won the lake.
Conclusion
First time at Lindholme Lakes.  Neil and his team are very welcoming, the facilities are good and the caravan’s while basic are comfortable.  The weather in the preceding week never helped today, but the hail storm really put a dampener of things for most.
The fishing is excellent mind you and Bonzai is stocked well, you can see the fish tails over at the island, getting them on the hook is a different matter.
Neil and his team prepared a cracking stew and Yorkshire pudding dinner for us all and it was free of charge and very tasty.
A big thanks to Neil Grant and Gary (Rambo) for a day well organised.  Lets hope day two has better weather, but looking at the forecast we may be in for the same again!