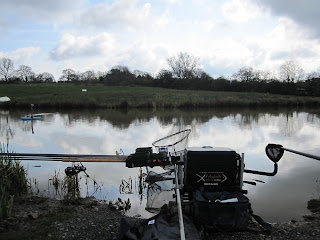 Steve May organises a match where the bait is supplied every year at Cudmore on the Arena lake.  Arena is of course famous for the Fishomania final that is televised on Sky.

Arriving at the fishery around 8am I caught up with Colin (BNF), Jim (JimSpurs) and Paul (Animal).  The rest of the usual suspects turned up and the banter started as per usual.

The main question on everyones mind was what bait Steve May have chosen for us all.  The match rules state that all competitors are to use the bait provided only, with no additives or colourings so it makes for a very even match.

The Draw
We all gathered outside in the rain and the usual disorderly queue formed.  I pulled out Peg 1, which turned out to be one of the flyers and is to the right of the aerator. It's also the peg that Shane Atkin won Fishomania 2011 from.  There was a total of 31 fishing today.

My neighbours for the day would be Pete Merce and Steve.  Pete Merce is a bit of a MFS legend and is currently in the top 5 five of the MFS Champions League. 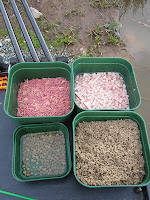 The Bait
Steve had provided us all with a plastic bag of bait, it contained:

The Set-Up
Looking at the peg the obvious aerator is a target zone, although it was more in Pete's peg so the halfway point for me was around 6 metres to the right of the aerator.

The depth was around 5 feet deep.  I also set up a margin line on the pole.

I also setup a method feeder and bomb rod.

The All-In
We had plenty of time set-up so it was quite relaxed when Steve called the all-in.

Bites were not plentiful, although there were a few line bites.  My first fish, a small skimmer came from the method after around 30 minutes and it was interesting to see that no-one around me had landed any decent carp.

So, 90 minutes past, one fish in the net and the day was about to get worse.  The heavens opened and the hailstones came pelting down on everyone.

I went out on the pole line baited with single red maggot and took another 4 small skimmers in the next hour.  Pete next to me wasn't fairing so well with only one fish in the net.  Steve had landed a couple of carp fishing tight to the island.

The next 3 hours of the match were biteless, both Pete and I commented that we couldn't work out what the fish wanted.  It was clear there were fish in the swim, but just not feeding.  We were both getting bored and had fun shouting a bit of abuse over the lake to Steve May when a lump he had hooked tore through his neighbours swim.

The last 30 minutes of the match turned out to be the best for me.  I had chucked the method tight to the island and after 5 minutes the tip flew round and a healthy 4lb Mirror carp was in the net.  With 15 minutes of the match left the tip went round again, this time a lovely fat 9lb common carp came to the net, I'm not sure it knew it was hooked to be honest.  The All-out was called and the heavens opened once again.

The Result
I had managed a lowly 14lb 12oz for 13th on the day.  The winner Ric H had 35lb so it was quite a low weighting match overall.

Conclusion
The weather played a big part in todays match and the fish just weren't feeding.  Fishing at Cudmore is always good but today was one of those days.  Being able to fish Arena was a privilege and Steve May's idea of bait provided proved a real leveller for everyone.

A big thanks to Steve and Andy May for the organisation.

Anonymous said…
I fished the arena 2 wks b4 MFS on a club match and drew 3 pegs to your right. Our match was also a struggle. A few of the lads stayed on and they switched on big time. I was rathe underwhelmed with the way the pool performed for a £10 peg fee. The national strip ponds and suez are much better pools in my opinion. Would only match fish it again if the draw was much later in the day.