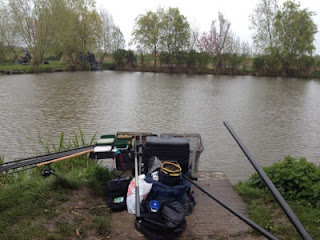 After the great weather the previous day, today would be totally different.  On waking up, it was windy, cloudy and there had been some overnight rain.  That would not be the last of the rain for the day!

We would be fishing Laurel's lake today.
The Draw
As previous, we drew in reverse order with our festival positions, I was about 18th so I had a good bag of pegs to chose from.  Out came Laurels Peg 33, another point!  This time, the wind was blowing straight at me which would make presentation difficult at times.
I didn’t have any real margin swims as this point is quite narrow, at least I had a stable platform to fish from.  It was a bit slippy and I almost slid in while setting up, luckily no-one noticed!
The Set-up
It would be mainly a pole attack, although I did set up a pellet waggler just in case.  The pole lines were:
The All-In
Everyone was set up with plenty of time, so I was able to fine tune the rigs.  As the All-in was called, the heavens opened and all of us would be fishing for 6 hours in the rain.  The long pole line was abandoned due to the wind, so I cupped in chopped worm on the left hand 5 metre line and dampened micros mixed with groundbait on the right hand line.
In the first 20 minutes, the float never moved, then I had a run of three fish, 2 perch, one around a pound and one small F1.  Topping both lines up every 30 minutes with feed, I was rotating the swims, problem was, they just weren’t producing on a regular basis, the pellet line taking a lot longer for a bite than the worm line.
3 hours into the match and I had a mixed bag of fish, skimmers, perch, roach and some small carp.  I went over the pellet line with a 6mm expander as hookbait and had an immediate bite which produced a lovely F1 of around 2lb’s.
The next drop in on the pellet line saw a foul hooked fish which torn through both pellet and worm lines before shedding the hook and returning the rig to me, without any tangles which was the only bonus.
It was that cold I was finding it hard to hook a pellet or worm segment.  It was even difficult getting my rigs hooked up to the top two sections when I wanted to feed that I had to resort to wrapping the line around my now numb fingers and dangling the hook to the bottom section of the pole in order for it to hook up!
Midge, who was behind me had hooked a large carp and was playing it for a good 30 minutes before it came to his net.  Turned out it was a lovely 15-16lb common carp and he landed it even though he hooked it in the tail!
5 hours into the match and I had just had bits, nothing substantial beyond the large F1.  The next put in over the pellet line saw me hook something a lot better and after 20 minutes a large common carp of around 9lb came to the net.  To say it was a relief was an understatement!
Final 30 minutes of the match I tried the margin line with a large worm and 6mm cubed meat, but it didn’t produce a thing.
The Result
16lb 9oz and another last in section! ;-(
Conclusion
The wind was blasting straight at me and it was raining all day long which made conditions awful to say the least.  The points as mentioned yesterday are the hot pegs to get, not on this day, or maybe I just fished it wrong.  The section winners came from the bays that were protected from the cold winds.
I cannot say I enjoyed today’s fishing and to compound it all, my Mum text messaged me asking if I was enjoying the rain... thanks Mum ;-)
Aaron’s Pool Challenge
After the previous nights beating by Aaron on the pool table, I took him on again.  I definitely had the upper hand even though Aaron plays “snooker” style pool, safety and snookering at every opportunity ;-)
So, with two balls on the table each, I decided to leave him a non-shot and left him behind one of my balls.  He played off the cushion, doubled his red onto the red over the pocket and cleared up... That plan backfired!
Lindholme Lakes Maggotdrowning Matches
Location: West Carr, Doncaster, North Lincolnshire DN9 1LF, UK