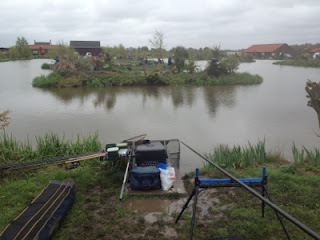 The final day of the festival and the weather look a little better, although we were not holding our breathe!

We would be fishing Bonsai Lake again for the final day of the Maggotdrowning Lindholme Festival.

We would also be fishing from 10am until 4pm, so an hour earlier than the previous days.

The Draw
I drew peg 25 on Bonsai.  The wind was definitely favourable and it was opposite the flyers, pegs 69 & 70.  I also had a peg either side of me empty, giving me plenty of scope for the island ahead.

The Set-up
My plan was around a single method for the day and that would be the method feeder.  I did set up  13 metre and margin pole line just in case.

I'd had a chat with Chris Walker the previous night around feeding patterns he had discovered during the week and the need for swim rotation.  My plan was centred around this information.

The All-In
I cupped out on the 13 metre pole line and then prepared my method feeder.

Then after taking a fish, or losing a fish from this swim to move onto the next swim and continue the feeding pattern.

I soon had the first carp on from the left hand swim, but it slipped the hook, so I cast to the middle swim.

It took around an hour to build up a rhythm of feeding and rotating swims.  Once the fish had settled, taking one fish from each swim, the bites came thick and fast with fish almost waiting for the method feeder to hit the water, which made feeding actually difficult!

After around 3 hours I did have a lean spell of around 45 minutes, but I persisted and the fish came back.  The better, larger fish were coming from the centre swim and the closer I got to the island, the quicker the bites came, but even if I miscast, I left the feeder in position and kept up the feeding regime.

The final hour, things slowed for me, and Keith on my right had been bagging fishing shallow and our weights would be very close.

The Result
88lb 2oz, Section 2nd and 2nd on the lake overall.  My best match weight and result ever!  Keith on Peg 27 weighted in 93lb, so I was beaten by a couple of fish.

Conclusion
I felt a little strange sticking to one method all match, but it was producing fish on a regular basis, so I stuck with it.  It is interesting that Keith next to me fished shallow and I fished method, yet we both had the fish feeding and our weights were very close.

A massive thanks to Chris Walker for the advice the previous night in the bar as it worked a treat.  Rotation of the swims and consistent feeding had the fish lining up with almost immediate responses from the method feeder hitting the water.  Thanks Mate! 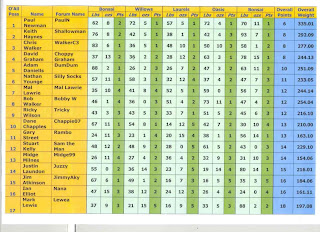 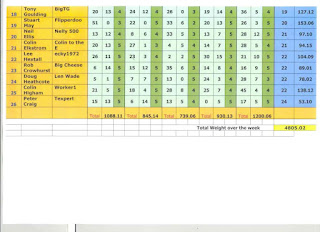