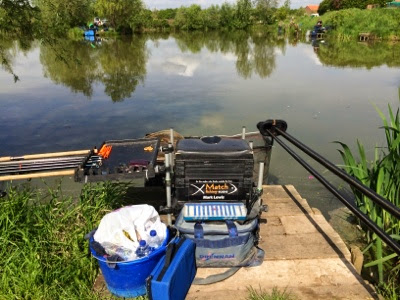 A beautiful day awaited the whole of the field, blue skies, sunshine, but very little wind, which of course meant no ripple on the water. Today we would be on Laurels.

The Draw
Peg 69 was going to be my home for the day. This is the second peg from the white gate, near where the aerator used to be.

The Set-Up
On my right I had a reasonable margin swim, but there was a lot of scum on the water. The old aerator spike was moving with fish around it so this was an area I would target with the bomb and waggler. More out of the bag today:
Bait options were sweetcorn, luncheon meat, worms, 4 & 6mm expanders with 6mm feed pellets and I mixed some groundbait to pot in on the margin lines.

The All-In
13 metre line potted with a cup full of luncheon meat to try and get the fish on the bottom. The margin was also potted with some loose groundbait and luncheon meat and straight over the margin line as the reeds were alive with activity. A couple of fish later and I started to get foul hooked fish. I shallowed up the rig but nothing.

I was pinging some 6mm pellets across to the aerator pole so picked up the waggler rod hooked on a corn skin and as in on the first cast. Of course, the fish went around the metal pole and snapped me! 30 minutes later and more casts, no fish.

Trying the 13 metre line I took two fish but the float was dancing around, the fish were shallow. Changing to the shallow rig slapping and pinging, 30 minutes gone, no fish!

There were some very large carp cruising on the surface, I hadn’t got into a pattern or figured out how the fishing was so I spent the next hour casting to cruising carp with the waggler. In an attempt to slow the corn sinking I greased the line with the fat from the luncheon meat. It worked a treat, but the fish just weren’t having any of it!

I was struggling to be honest. So, trying the margin line again I managed to get into a rhythm with either luncheon meat or corn on the hook. I spent the rest of the match in the margin and was hooking small F1’s and small barbel that go like a steam train! One decent mirror around 4lb, but that was my lot. All out, I knew I would not have pleasant result.

Conclusion
A blow out today for me. The hour spent chasing the large fish that were cruising cost me dearly. Weights around the lake were from 20lb up to 126lb.