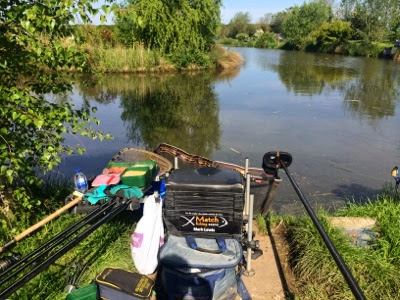 The final day of the festival and I needed a good result to beat my previous years position on the festival.  My weights were down this year which wouldn't help.  We would be back on Bonzai today, the British summer has really settled in and it was looking like being a scorching day!

The Draw
An earlier draw today with an earlier finish to allow those travelling to get home.  Peg 17 would be my home today, almost next to the road out of lindholme!

The Set-Up
I had an island chuck for the method feeder, as the island was a little over 16 metres away.  The right hand margin was very tempting with plenty of fish activity so that would be a target, I also put in a 5 metre line that would be fished with meat or corn.

The All-In
Potting in on the 5 metre line and priming the right hand margin it was straight onto the method feeder tight to the island.  I took 5 fish with the first 5 casts.  The day was looking good!  Next cast was a "squirrel" cast, straight in the tree!  Re-rigging the method, another squirrel, this time the feeder and hooklength came back intact.  The first hour past very quickly and I found that I needed to cast very tight to a spot on the island to keep the fish coming.  The inevitable happened and the fish backed off this line so a few more casts around to try and locate the fish with no success so it was a switch of lines.

The right hand margin was just too tempting so I went over my loose fed groundbait with double sweetcorn in an attempt to get through the scum that had gathered in the corner.  The bait and the float were getting hung up on it making presentation impossible, so I decided to go clear it with the landing net.

Dropping the rig in, I was amazed that fish were still in the swim after all my "clearing up".  I managed to take a couple of fish before the scum came back.  I ended up clearing the margin 4 times during the day until it just became impractical to keep clearing it, but I refused to abandon the line as there were plenty of fish there.

A quick look on the 5 metre line and a couple of fish, but nothing regular.  The far bank method line had also dried up, so I decided to drop the method in the margin and not worry about the scum.

I spent the last few hours in the margins with the method feeder.  The bites were savage and I was taken into the bull rushes a few times resulting in lost feeders.  One lump turned up and I got that in, as it swam out of the margins on the take.

The All-out was called.  I knew that Jimmy had beaten me next door, meaning that he was probably on for the section win and festival win.

The Result
76lb, section 3rd!  Overall 17th in the festival

Conclusion
I was catching well, clearing the margins didn't affect the fishing too much and the method in the margins produced the goods for me.  Too many lost fish cost me.

A great weeks festival, well organised and run by Gary.  Thanks mate, until next year!

PS Put a 150ml cup of groundbait in and swirl it arround then drop your rig in ;) and use a min .25g float with shot 2" from hook