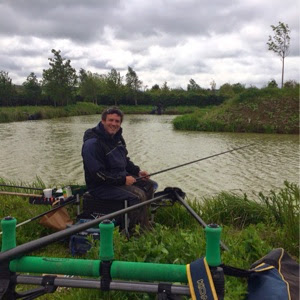 The start of 6 fishing days for me and a return to Peb’s place, How End Fishery. The talk on Match Fishing Scene was that a draw on Dani’s would be favourable given the expected weather. My record hasn’t been to good on Dani’s. The usual suspects were at the fishery, always great to catch up with them all.

The Draw
With Yasi’s and Dani’s in the bucket and most people wanted Dani’s, given how the weather was developing even I start to hope for a draw on Dani’s. So, I was very pleased when Dani’s 15 came out of the bag.

The Set-Up
With an island chuck the method rod came out of the bag and I also set up a 5 metre and margin line on my left. Bait was simply caster, maggot, corn, micro pellets and expander pellet.

The All-In
By the time we had all set-up the wind was blowing straight down the lake, today wasn’t going to be easy for those on the pole!

Potted in on the 5 metre line with a squeeze of micros and some casters and then straight over tight to the island with the method feeder. I was straight into the carp and in the first hour had 8 fish in the net while others around me weren’t catching at the same rate but I wasn’t counting my chickens too soon as there was plenty of time left!

Each hour I potted in on the 5 metre line and I was hand feeding the margin with casters. As the second hour past I was still catching despite the weather getting worse.

I was casting up and down the island line and found that I was getting fish quicker on the point of the island. Into the third hour my method line died and I was fishless for 30 minutes, casting to different areas every 10 minutes.

Time to try the 5 metre line which was a struggle with the wind. A few silvers in the net, but nothing to note.

Meantime the other lads around the lake that I could see where catching, this time allowed them to catch up to me. Ben was catching well from his margin swim.

The next 2 hours I was chopping and changing and could not string any fish together.  The final 30 minutes I went back on the method and managed to snare two more carp. Ben had definitely caught me up, had I done enough?


The Result
36lb 14oz which gave me a section 3rd. I had just beaten Ben, those final two carp had done it. The best prize of all was getting Pikey’s pound… He even wrapped it for me… in a load of paste!

Conclusion
The hour where I wasn’t catching pushed me down the final result. The wind really made it tough, I was lucky that I had a method chuck rather than struggling with the pole. Again, How End continues to impress, a job well done Phil and Tarnya!