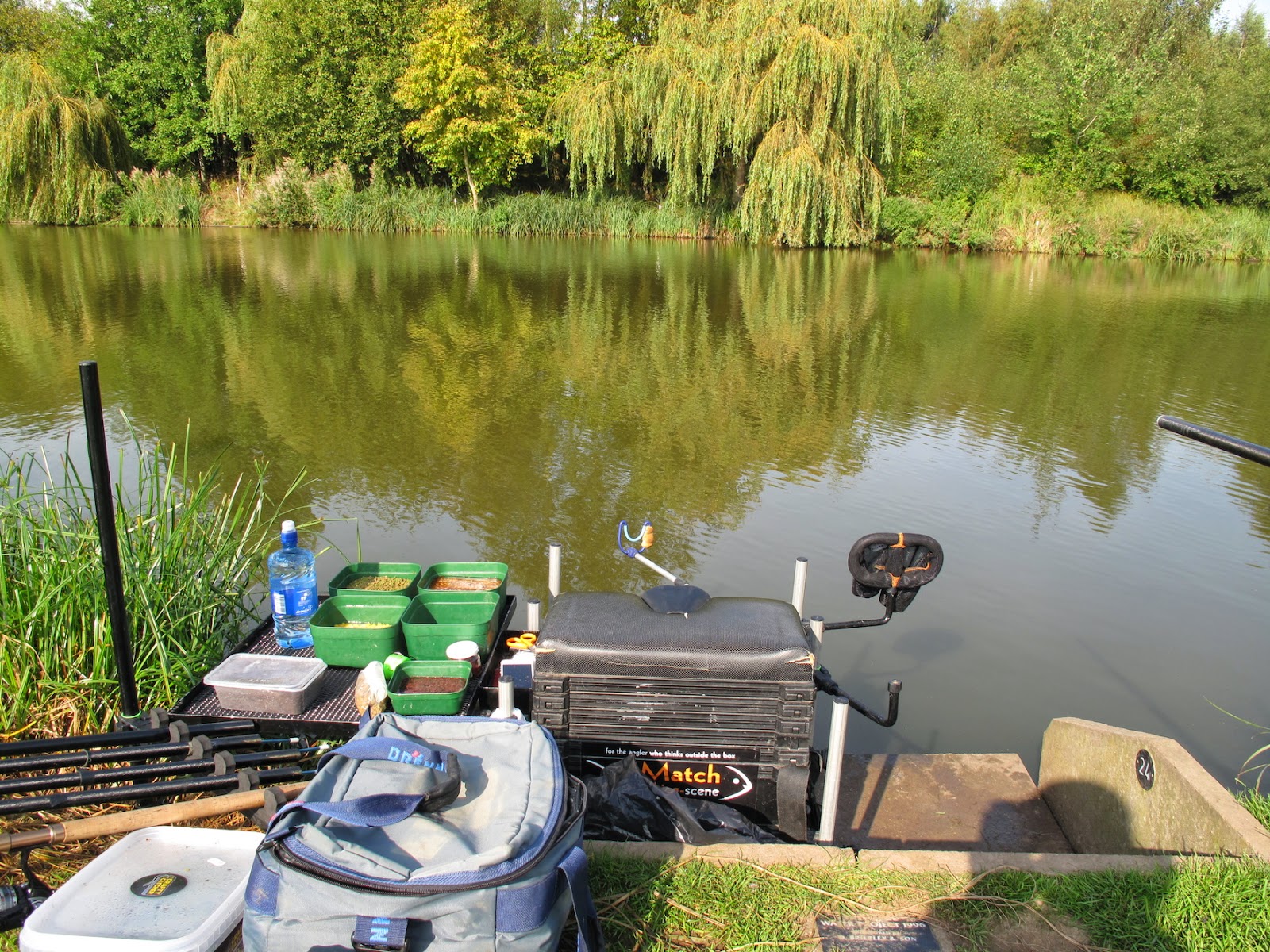 Elvis Presley lives!  Well he did visit the Longshoot last night.  I've never seen the place so packed.  Together with the XXL burger it was a quiet'ish night.  I was knackered and headed to bed well before the rest of the lads, some of which where up until the small hours.

Arriving at the fishery it was clear who had been out on a big night.  The final day and the scores between the Munkees and the Shandies was all tied.  24 points on offer today and it was one Munkee verses one Shandy a head to head battle, who would I be fishing against and where would I draw?

The Set-Up
After seeing yesterday fish were being caught shallow I decided to change my match plan.  I set up the following:

I would ping casters to get the fish shallow.  Other baits, corn, hemp, worm, dead red maggots and expanders.


The All-In
So the plan was to get the fish confident shallow, so I chucked the feeder out for the first 45 minutes of the match.  The feeder line was hampered a little with a large willow tree in the way so I was casting a little to my left.  Leaving the feeder a little longer than previous days I was pinging casters over the 13 metre line.

No fish came from the feeder line, time to try the new match plan by going over the 13 metre line at full depth with 6mm expander, but continuing to ping casters.

The float was wafting around, tell me that fish were shallow, a quick change to the shallow rig and I was quickly into a fish.  It was a large skimmer.  The next hour feeding casters I picked up 5 large skimmers shallow, a couple of them breaching the water when hooked.

Finally I hook a carp but loose it.  Switching tactics and going full depth picked up some crucian carp.  I found myself switching between the shallow rig and full depth rig but nothing substantial was happening.

Checking the 5 metre line that I had not fed, I kinder potted a ball of micros following it down with a 6mm expander... more crucian carp, no carp yet.

Around 2 o'clock, I only had silvers in the net.  Steve next to me was struggling too.  I had fed 2 pints of casters on the 13 metre line and finally I started to see some large fish milling around.  It was too tempting so back on the shallow line.

Finally!  I managed to hook some and land some decent weight builders.  I also lost quite a few fish, one bending a strong guru size 16 LWG hook!

With 90 minutes to run it was time to see if anything was in the margins.  Potting in sloppy groundbait the tell-tale signs of fish were there with swirls in the water.

I managed to take 2 good carp of around 8lb from the margin.  I also lost a lot of fish.  The all-out was called I was hoping that I had done enough.  Pool 1 had fished hard for many anglers...

The Result
40lb odd, taking the pound of Steve 50-50, but his guess of 15lb 8oz was only 2oz off his actual total meant he won the pound for the closest guess.  A point for the Munkees, I was happy.

Munkees vs Shandies - Final Result
After two days, the scored were tied.  Day 3, 24 points at stake.  Final scores, 12 all... Everything tied!  Well fished everyone, great craic and well organised Sconey!

Conclusion
Fishing was a lot harder today than the previous days.  It was a matter of taking fish from different swims and keep on rotating... the margins came alive in the closing hour... they were just tough to catch!
Match Fishing Scene (MFS) Matches Munkees vs Shandies The Glebe