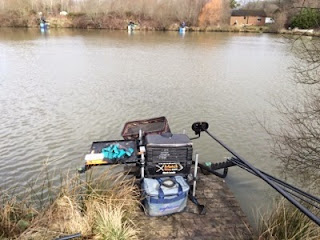 A very quiet night in the Lodge of Plenty including a dip in the hot tub so we were all bright eyed ready for our breakfast as cooked by our residence personal chef Colin.

The Draw
8:30am draw and as usual Redarmy manages to push to the front of the queue.  My home for the day would be Emily’s peg 7.

Emily’s is behind the tackle lodge and as yesterday it’s a lake we’d not fished before on the Silvers festival.

The Set-up
I spoke to Jamie (one of the ASBO twins and my team captain for the week), who said, pellet at 7 metres.  So I set up a couple of pole lines to fish 7 metres at the usual 10 o’clock and 2 o’clock.

Two rigs to cover both swims, one at dead depth and the other being the ’99’ lift bite rig, where two number 9’s are placed about 1 inch from the hook and the float is dotted down.

Dead reds, pellets and groundbait was bait for the day.

The All-In
Same approach as yesterday with one line fed with groundbait and the other only one small nugget of micro pellets.  Straight over the pellet line and then mother nature decided to show us all who is the boss.  The skies darkened and the hailstones came raining down.

I managed to winkle out a couple of fish, and I mean two fish in the first hour.  All the lads around the lake were struggling.  It was cold, wet and miserable…

Hour two was no better even after the weather had abated.  Two more fish joined their friends in the keepnet.  I had a look over the groundbait line which produced another few fish, but nothing large.

The wind was blowing across the peg and holding the pole at 7 metres was even tough, so I decided to break out the feeder rod.

There is sunken island in the middle of Emily’s so I put my first cast into the shallower water to see if any silvers were there.  The tip had just settled and then it ripped round… a small mirror carp made an appearance, while they don’t count, it was nice to actually catch a fish!

Another hour passes by and I managed 4 more fish on the feeder.

The final hour as the weather cleared up I went over the groundbait line which finally started to produce.  I called the all-out and we all new that we wouldn’t be breaking any records today!

The Result
3lb 15oz for 4th in Section, but beating Colin K and getting a jock pound.  The Lodge pounds I had to pay Colin, Shedders and Animal which on the upside means more pools money for the lodge kitty!

Conclusion
A tough day all round with a great lake win for Shedders with 9lb 12oz and a section second for Animal.  Animal was on fire, potentially leading the festival with Andy G.  All weights for the day across all the lakes were down with 17lb being the highest weight.