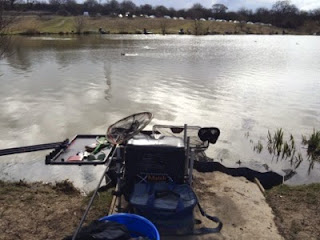 Pole lines were set up at:

The plan was to fish banded pellet and expander pellet, with some dead reds as back up.

All-In
Normally matches run on time, but George's time keeping was, well a little out today.  He eventually blew the whistle at 10:35am after much abuse from around the lake.

I decided on a negative and positive approach on the 13 metre lines, so potted in some 4mm pellets and dampened micro's on the 2 o'clock line and would kinder pot micros on the 10 o'clock line.

4mm expander pellet was the hookbait.  Shipping out on the 2 o'clock line using my far bank marker, placing the rig in delicately expecting a bit to take a few minutes... well, that was the plan...  After an hour I had a couple of roach in the net.  My thinking was that the silvers were getting the pellet before the carp so I switched to a banded 4mm pellet.

Garry next to me had a carp on his long line but the action was slow.  The banded pellet while resisting the silvers still wasn't producing an carp.  Checking the negative line it was the same story.

Change of bait and tactics, so a couple of dead reds as hookbait.  Both the negative and positive lines started to produce.... silvers and more silvers... I felt as though I should be back at Stafford Moor on the silvers festival.

Finally a carp came to the net after I upped the bait to 3 dead red maggots, and then, yet more silvers.

I decided to try my close in line to see if that would produce some carp, it did, but only 3 fish came from that line, the rest were of the silver variety.

Going into the last hour, Gary started to get fish from his margin line, the sound of his puller kit put even more fear into me as carp after carp was landed.  I was still getting silvers...

George's time keeping for the all-out needed a friendly reminder and finally the whistle went but not before I managed one more carp.

Result
14lb mainly of silvers with a couple of carp to show, dead last on the lake and battered both sides (thanks lads).  A pound to Steve 50-50 and as I was rushing off we decided to double or quits at How End next week.

Conclusion
Well the match plan didn't work.  It was a pretty cold day and on reflection I should have broken out the method rod to get me that bit further out.  The dead red's were certainly bringing the silver fish in and banded pellet just wasn't producing the bites.  Finally, I had forgotten some sweetcorn as I had rushed out the door to make the draw.

Final report card, "must try harder" and "is capable of better results".