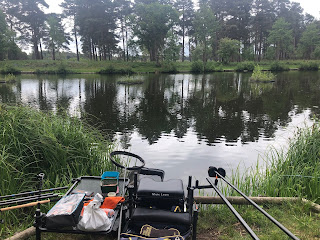 Back to Stockbridge with Farnham Angling Society for the bank holiday weekend.

The weather this week has been warm and sunny and it was great to see the lily pads while up walking round the lake as it really helps to define where the real fishy swims will be, especially peg 9 known as the double lily swim.

The Draw
Reports from the previous week is that the deeper part of the lake (pegs 14 upwards) hadn't fished as well as the earlier, shallower pegs.

A group decision was taken to fish pegs 2 through to 14, the shallower pegs.

I was last name on the list so ended up with Peg 14 and the scales.  I was not unhappy with the draw as I had Avery short walk from the car park but more importantly some lily pads to target.

Set-up
As always at Stockbridge, the Waggler rod came out of the bag and was plumbed to full depth, marked on the rod and then set to half depth to sew if the roach were up in the water.

Bait Worms, casters, maggots and some dark F1 sweet ground bait mixed to a consistency where it just forms a wet ball.

All-In
Started the two long pole line swims off with some sloppy groundbait and caster.  The lily pad line I added chopped worm, just for the tench of course...

Fishing started on the waggler however after half an hour nothing at all... So I sacked that idea for the time being and tried the lily line with a segment of worm.

The float settled and then shot straight under.  Result a small greedy perch.  Obviously the worms had brought the small perch into the swim, so I decided to fish it out and take as many perch as possible hoping that a tench would turn up.

I fished the swim for a further hour switching around between worm segment, single and double red maggot to a longer, nipped piece of worm and then eventually some tench turned up.

Taking two tench from the swim before things went quiet again.  The next decision was, more worms or just groundbait?  I went the worm option not minding if the perch appeared on the line again.

Back on the lily line for the rest of the match and I managed some more tench who luckily enough swam right out of the potential snag with the lilies and into the open water.  The next fish however wasn't so obliging.  The float dipped and before I had struck elastic was out of the pole and straight into the middle of the lilies.

Adding sections to the pole it was clear the rig was caught and releasing all tension the fish was still on as the lily pads were moving however I could not get the fish or the rig free.  I had to pull for a break and had mentioned to Aps on peg 13 that if the lilies were still moving after the all out I'd go in to release the fish.

Luckily the fish did free itself however the rig was gone and with only 30 minutes left, not having a spare rig ready it was a quick decision to adjust the waggler to the pole depth marked on the top kit and straight back out.

Some more sloppy groundbait went in and the float sailed away resulting in another fish.  I managed two more tench before the all out.

Result
Nine tench plus bits for 14lb 8oz and the match win. 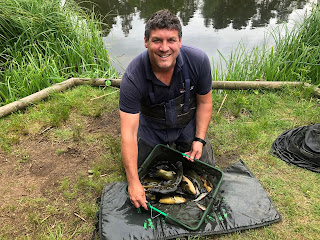 Conclusion
In hindsight, we should have pegged the front back leaving plenty of space between each angler in both the shallow and deeper parts of the lake.

It was also clear that the tench were coming to the noise of the sloppy groundbait which formed a lovely cloud in the clear water.  Having some casters in the groundbait provided some grazing for the fish with the worm hook bait being a standout and doing the damage.

Next time... set-up a spare rig!  Excuse for the day, the all-in was called earlier than normal.

A lovely day with a great result!

Mark Lewis said…
It’s a lovely venue, very old school with some cracking tench in it!