To begin with I was casting to the gravel bar in line with the island and just off the back of it too and after the first hour had nothing in the net to show for it even though there were fish clearly moving in that area.


Dave Stockton had setup 3 pellet waggler rods and I was very interested to see how he fished the line together with his feeding pattern.

I started to drop the bomb short of the island and gravel bar and just about immediately connected with my first fish, so did Dave!  Another cast and another quick fish for me.  Now my bomb swim just wasn't producing the results and Dave quickly overtook me on the fish count.

I mentioned to Dave that his patience was admirable, Dave responded and said it was plain stubbornness!

I decided that I would no doubt need the 5 metre and probable margin line as after 4 hours, I had two carp in the net!

The 5 metre line was a banded 8mm pellet feeding very small amounts of 6mm pellets and as the match ticked into the last hour I started to get fish, carp at that!

I also lost fish, three, not that I was counting.  The margin line never played apart despite heavily potting in corn after a chat with Neil Dudsbury who fished a festival a few weeks prior to the May festival.

The all-out was called, Dave has smashed me out of the park. 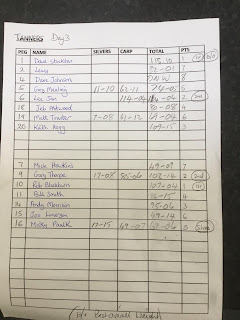 32lb for 7th in section.  This festival result was slowly getting worse and as predicted pegs 10-14 had done well however a big well done to Dave Stockton for taking the match with with 115lb.


Conclusion
Thought of the day was that Pegs 2 and 4 had been hammered the previous day and the fish had simply backed off in a sulk.  The next day, Peg 2 threw up a 100lb weight.

What should I have done differently?  Well, set-up a long pole line and abandoned the bomb line earlier.

The fish I lost on the 5 metre line broke the hook length which is always gutting and they were definitely larger fish.  Lesson learnt, onto Pines tomorrow to try and salvage some points.
Matches Stafford Moor