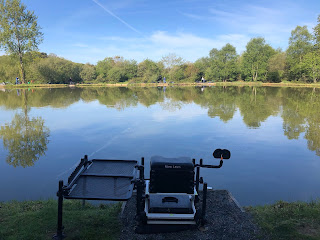 Section rotation meant that Oak was today's challenge and having only fished it a few times in the MFS winter silvers festival I really didn't know what to expect.  It would also be a pole only match which makes it a little more interesting or challenging whichever way you look at things.

Set-up
Pole only so I fished three lines with the following rigs.
Pellets (micro, 4, 6 and 8mm) along with some worms for the margin as bait.

All-In
The weather was extremely warm so my match plan was to try and get some fish on the deck with hard 6mm pellets on the long line.  It was pretty apparent once the very deep rig went in the fish where of course shallow, so I started to ping out some 4mm pellets and picked up the shallow rig.

The first hour I managed to put three fish in the net however Gary Thorpe to my right on peg 12 (the drain pipe peg) had put a lot more in his net already.

It was certainly a very hot day that would result in a little bit of sunburn at the end of the day.  I started to think about the depth that fish like to feed in so I started to fish the shorter 6metre line earlier than I would normally which gave me a run of fish although I was way behind the rest of the anglers in the section. 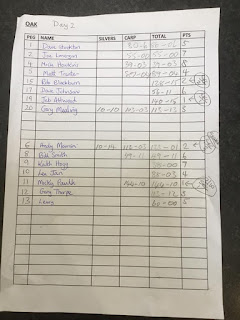 The margin was the only place left to turn and I had noticed some swirls so the banded 8mm margin rig was lowered into place resulting in a skimmer... followed by another skimmer.  The swirls were definitely carp, so I replaced the hook length and baited up with a large worm.  Fish on!

I finished the match when the all-out was called in the margin and hopefully had saved some dignity for the weigh in!

Result
60lb for 5th in the section.  Mickey taking the section win fishing shallow with meat at 6 metres!

Conclusion
The margin line saved me an embarrassment, on hindsight and after hearing the next days results I should have concentrated on the margins from the off.

I wasn't comfortable fishing the deep peg for carp and could not get the shallow line working.  Overall a disappointing day for me and the results showed it!
Matches Stafford Moor