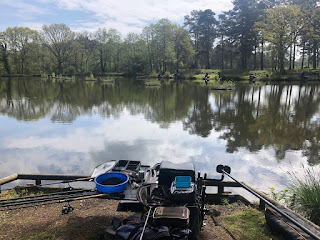 After nearly a month of no fishing it was back to Stockbridge Pond with Farnham Angling Society for one of the regular Sunday matches.

A good turn out, with 19 fishing so both sides of the lake would be in use today.

The Draw
Talk was that everyone wanted the closer, shallow bank rather than the higher peg numbers.

My home for the day would be lucky for some, peg 13.  One peg along from the last match I fished here.

Set-up
The Waggler is a must at Stockbridge so that was first out of the bag, given the days weather, warm but overcast I opted to start this at half depth.  A feeder rod was also set-up to fish over the waggler line.

Pole lines where:
Bait all natural, maggots, casters, worms, some sweetcorn and a little bit of groundbait for the feeder.

All-In
A small ball of groundbait mixed with worm and caster on the lilly line and a small pot of caster on the 13 metre line together with 6-10 casters on the roach line and straight out on the waggler.

Now at Stockbridge there are plenty of bites to be had.  No so the case today.  After the first 40 minutes it seemed everyone was struggling.  Ian over the other side was getting some fish on the waggler and Charlie next to me had also started to catch shallow.

I continued on the waggler, changing bait to a single white maggot and the float disappeared the moment it hit the water.  It was definitely a better fish which took me straight into the lilly pads and locked up the line.  Luckily releasing the pressure the fish swam out itself and a lovely tench around a pound was soon in the net.

The action didn't really hot up after that and it was pretty tough.  I was changing the depth on the waggler to try and get in touch with the fish.  A few more silvers in the net but nothing on a regular basis.

The pole lines never produced anything so it was out on the feeder which eventually gave me another tench.

The all-out was called, lets see what the weights are like! 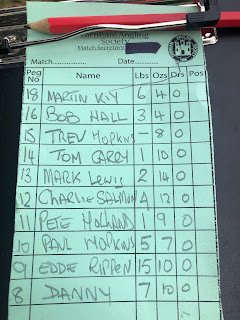 Conclusion
The day seemed to drag maybe down to the lack of bites and it was clear that our side of the lake fished hard while the lads on the other side where getting fish and bigger fish at that too!

Maybe it was down to the previous cold weather and that the fish wanted to be in the deeper water that on the other side.  Tough all round. 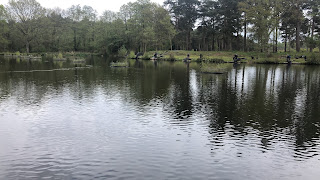