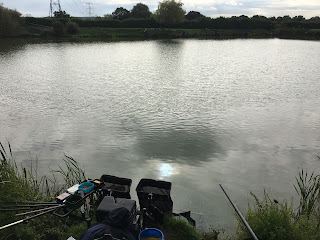 Day 2 of the festival.  A great night out with some of the lads in Epping at a fantastic Turkish restaurant where the food came in absolute abundance which wasn't helped by Simon pilling more and more food onto my plate!

For a change heads were reasonably clear and we arrived to a beautiful overcast day at the fishery.  Section winners yesterday were Stephen Daniels, Chris Vandervleit, Andy Gregory and Paul Law so these lads would be wanting a great draw and to be in a section preferably without the others!

The Draw
Once again Chris let me draw for him, mainly as he was holding the bag with the pegs in them.  Out came peg 36, something which he was very happy about!

My draw, I'd be on Peg 7, again on the right hand bank although with a great margin line clear of other anglers to my left.  Colin Bartlett, fishery owner drew peg 8 next to me.  Now there is a rule that if you draw next to Colin it's a fiver, not the normal pound so we I had to do well.

Set-up
A simple setup today.  I broke out the bomb rod that would double as a feeder simply through changing the bomb for a feeder on the snap link.  Pole lines were at Top two + 4 straight ahead and Top two + 4 for the margin to my left.

I'd beefed up my margin rig to 0.22 to a 0.19 bottom as the carp in here are particularly large.  I didn't feel the need for a long pole line as I could cover that with the feeder if needed.

All-In
Learning from yesterday I up'ed the amount of particles in the groundbait and fed 4 balls on my short pole line.  Starting on the bomb, pellet and tea bag casting around 20 metres the bait had been in the water for about a minute and my reward was a cracking bream of around 3lb.  Next cast and another cracking bream which repeated for the first 30 minutes.  I decided that if the bigger fish were out on this line that a change to a feeder would help put some bait out and keep them interested.

Changing to a feeder certainly helped and for the first two hours of the match I was steadily bringing in decent skimmers.  I had a very funny bite which I lift the rod on and a large linear mirror eventually came to the net.  It was over the 10lb mark so it was going back in the lake but not before Colin grabbed a picture of me with it.

After the carp this line died off a little so it was time to check the short pole line ahead.  Well the wheels fell off slightly as this line wasn't producing like the feeder line so for the next couple of hours I chopped and changed between the two grabbing the odd skimmer however Colin had started to get better fish on his long line and Mr Bald was bagging some carp on the other bank.

Going into the final 90 minutes I went onto the margin line cupping in groundbait and using a large worm as hook bait. Predictably the few few fish were roach however great stamp roach!

Finally I hooked a carp which again went back as it was over 10lb.  I had two put backs and a good bag of silvers I just needed one more carp to grab second place.  The next carp came along after about 20 minutes and it was a monster.  I had spent around 10 minutes playing it when it finally popped up just beyond netting range.  My estimate was around 25lb which would have been my largest carp ever.  It was plodding along just beyond netting range and I'd strip my elastic back.  One lunge from it and the hook length broke bringing my rig back to me.  I was gutted, but hey, thats fishing for you. 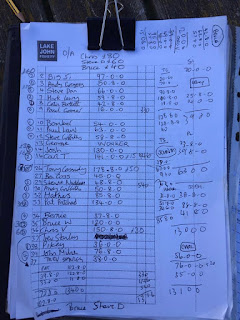 The margin line I found that I had to pot in groundbait and go straight over it which started to produce better skimmers.  I fished the line until the end of the match adding some more weight to the net but had I done enough?

Result
59lb 8oz for 3rd in section.  That lost carp cost me the second spot...  However I beat Colin so that meant he was £6 down to the Northern Monkey ;-)

Congratulations to Chris for winning the festival (again)!

Conclusion
Changing to the feeder on the bomb line certainly helped to get more fish out of the peg.  There wasn't too much waiting around for a bite on this line until the carp arrived.  I was pretty frustrated with the shorter pole line and my after thought is that I should have had a longer pole line as back up.

The margin line, having to feed a cup of groundbait everytime it was clear the skimmers were homing  straight in on the feed going in.

Overall pleased with the fishing, it was certainly better than day one for me.  The bonus?  Winning £6 from Colin, although I did loose a pound to Big Si!

Weights on the lake today were a lot better than yesterday with TC winning the lake with a fantastic weight of 178lb from Peg 26 including a 30lb common carp caught on the pole.

Lake John is a great fishery, well run with excellent banter.  Give it a try and take plenty of groundbait! 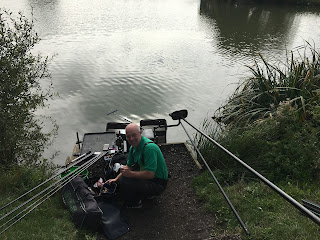 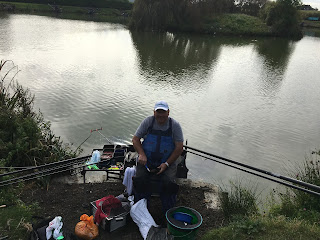 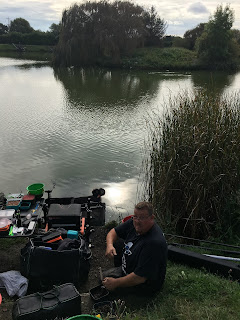 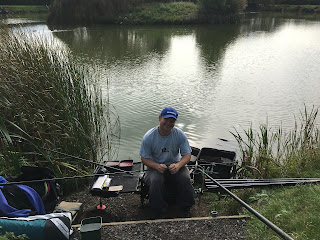 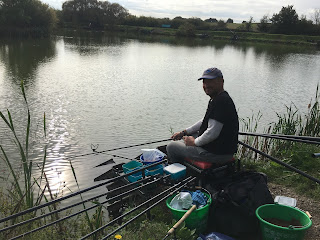 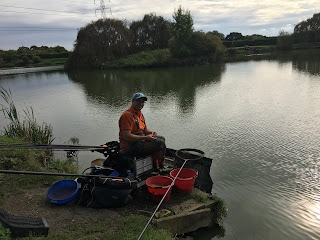 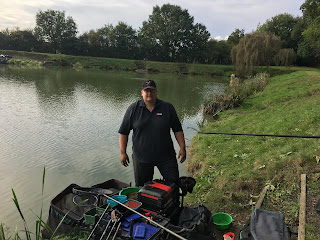